Bloody Sunday: Decision not to prosecute soldiers under review 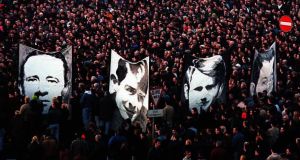 Pictures of the victims of Bloody Sunday being carried through the crowd of thousands after the 25th anniversary march for Bloody Sunday in Derry. Photograph: Brian Little/PA

Lawyers representing the families of nine of those killed on Bloody Sunday have asked the North’s Public Prosecution Service (PPS) to review its decision not to prosecute nine soldiers for murder and attempted murder in Derry in 1972.

They also contend the former member of the British Army’s Parachute Regiment known as Soldier F – who is already facing two charges of murder and four of attempted murder on Bloody Sunday – should be charged with the murder of three other victims and the attempted murder of two of the wounded.

In legal submissions to the PPS, seen by The Irish Times, Madden and Finucane Solicitors contends the service “erred” in failing to prosecute these soldiers.

In a statement to The Irish Times, a spokeswoman for the PPS confirmed “detailed legal submissions” had been received.

“The PPS is currently reviewing decisions not to prosecute a number of suspects reported by police in connection with the events on Bloody Sunday, as requested by a number of the victims and families of deceased persons involved,” the spokeswoman said.

“We are now in a position to further progress these reviews.”

She said it was not possible “at this stage to give a time frame for this process to be concluded,” but they would “continue to keep families and victims informed”.

Thirteen people died when soldiers opened fire on an anti-internment march in the Bogside area of the city on January 30th, 1972. A 14th died later.

The PPS considered offences including murder and attempted murder in relation to 17 former soldiers and two alleged former members of the Official IRA following an investigation by the Police Service of Northern Ireland.

It concluded in March there was sufficient evidence to prosecute Soldier F for the murders of James Wray and William McKinney and for the attempted murders of four other men. The case began in Derry in September.

In respect of the other 18 suspects, PPS director Stephen Herron said it had been concluded “that the available evidence is insufficient to provide a reasonable prospect of conviction”.

“In these circumstances the evidential test for prosecution is not met,” he said.

They also argue Soldier V should face a charge of attempted murder or grievous bodily harm for the injuries caused to Peggy Deery, as should Soldier H in relation to four of the wounded: Joe Friel, Joe Mahon, Michael Quinn and Patrick O’Donnell.

They further contend Soldier F should be prosecuted for the murders of Michael Kelly, Bernard McGuigan and Patrick Doherty and for attempted murder or grievous bodily harm for the injuries to Patrick Campbell and Daniel McGowan.

The firm’s submission is that the PPS “erred in law” in a number of respects, including in their conclusion that neither the test for prosecution nor the evidential test had been met and “in concluding that ‘there is no reasonable prospect’ that the soldiers’ own accounts would be admitted in evidence”.

Madden and Finucane argue that, among other factors, the PPS failed “to scrutinise the circumstances in which these statements were made and the legal framework in place at the time”.

Therefore “the PPS conclusion to the effect that there is no reasonable prospect that the court will admit any of these categories of statements is in our reasonable submission flawed”, the firm stated.

In a summary document published in March 2019, the PPS said that, in regard to the admissibility of the soldiers’ own accounts, a combination of factors around the circumstances in which they were made “led the prosecution to the clear conclusion that there was no reasonable prospect of any of them being admissible against the soldiers who made them.”