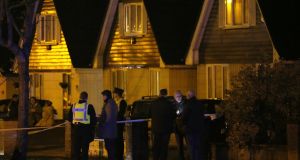 Gardaí investigate after a shooting on Clonshaugh Avenue in Dublin on Sunday evening. Photograph: Nick Bradshaw

A man shot and wounded in a gangland attack in north Dublin has died from his injuries in Beaumont Hospital.

The victim, who was in his 20s, was wounded several times in a house on Clonshaugh Avenue, Clonshaugh, Dublin 17.

One line of inquiry being explored is that the attack is linked to a worsening gangland feud between men mainly based in the Coolock area on the north side of the city.

As news emerged on Sunday evening that efforts to save the man’s life were not successful, Minister for Justice Charlie Flanagan issued a statement condemning the attack.

“I was deeply concerned to hear of the shooting this evening in the Clonshaugh area. I condemn this wanton violence,” he said.

“I urge anyone with information to please contact An Garda Síochána and assist them with their investigation.”

Gardaí in Coolock were on Sunday evening opening a murder inquiry. A statement from Garda Headquarters said the emergency services were called to the scene of the shooting at about 5.15pm.

It added that while the man had been treated for gunshot wounds before being taken by ambulance to Beaumont Hospital, he was pronounced dead shortly after arriving at the hospital.

“Members of the Garda Technical Bureau are currently examining the scene and an incident room has been established at Coolock Garda station,” the Garda statement said.

“The coroner has been notified and the services of the State Pathologist have been requested. Arrangements are being made for a postmortem examination.”

Gardaí in Coolock have appealed for any witnesses to come forward. They were also seeking any dashcam footage recorded in the vicinity of Clonshaugh Avenue between 4.30pm and 5.30pm on Sunday.

If the killing is confirmed as being linked to the Coolock feud, as anticipated, it would be the fifth fatal gun attack in the feud since January when Zach Park (23) was shot dead in Swords, Co Dublin.

In May, Sean Little (22), from Kilmore, Dublin, was shot dead near Walshestown in north Co Dublin.

Also in May, Hamid Sanambar (41), an Iranian gangland figure in Ireland, was gunned down on Kilbarron Avenue, Kilmore West.

The gun murder of another man in recent months has also been linked to the same gang dispute. Details of that killing cannot be published for legal reasons.

Gardaí believe a number of botched murder attempts in recent months were also linked to the feud.

While the separate Kinahan-Hutch feud remains of primary concern to gardaí in Dublin and the force’s specialist Garda units, the worsening feud based loosely around Coolock has escalated sharply.

The murder rate in the Coolock feud has now matched the early months of the Kinahan-Hutch dispute and gardaí are concerned as the violence has continued despite a very significant operation targeting the gang members, most of whom are in their early 20s.