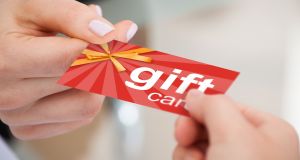 ‘If you want to buy a gift card or a voucher, hold off for a week or two.’ Photograph: iStock

Following the signature of the legislation last week by President Michael D. Higgins, the Government is to bring the long-awaited Consumer Protection (Gift Vouchers) Bill into force on Friday. It will oblige businesses to accept vouchers for at least five years after purchase.

Until now some shops have put expiry dates of as little as three months on the popular gift choices, with an estimated €70 million being wasted every year when vouchers expire or are forgotten about.

Dermott Jewell of the Consumer Association of Ireland cautioned shoppers not to buy vouchers until President Michael D Higgins had signed off on the legislation, adding that the imminent introduction of laws to better protect consumers followed a “painful” 25-year campaign.

“If you want to buy a gift card or a voucher, hold off for a week or two,” he said. “The legislation that is coming in is going to make your gift of significant more value to the person you are giving it to. If you are looking for value for money, this week is not the week to buy or spend money on a gift card or voucher – hold off until the Bill is enacted.”

Mr Jewell said gift cards and vouchers bought this week will “probably have to be used within three months, six months or 12 months”.

“What will happen in a week’s time is every gift voucher issued must – at a minimum – have a lifespan of five years.”

In addition shops will be obliged to give change or a credit note for the difference when purchasing something of lesser value than the voucher. This will also have a five-year lifespan.

Until the legislation is passed, the trade in vouchers remains largely unregulated and shops, restaurants, airlines and other businesses have been free to refuse to refund any difference.

Industry sources, according to the Department of Business, have suggested the annual value of gift voucher sales is around €600 million.

Further estimates that 15-20 per cent of vouchers are never cashed in suggest Irish people squander around €120 million every year by not redeeming them.

“There are millions – literally millions of euro – in unclaimed vouchers sitting in people’s drawers, cupboards and pockets,” said Mr Jewell. “It is quite extraordinary.”

Mr Jewell said some retailers have had a policy of honouring gift cards or vouchers “no matter how old”. But many gift recipients were “sent packing” when they tried to exchange a voucher after a shop-determined expiry date.

Although the Consumer Association of Ireland campaigned for a six-year minimum expiry date, Mr Jewell said he was “pretty happy” with the new protections being offered to consumers. “But it was too long coming,” he added.

“I have been with the Consumers Association 25 years now. In my first year, we were trying to get something across the line on this. Twenty-five years later it is finally happening. It has been painful to get across the line.”

A spokesman for Minister for Business Heather Humphreys said she “intends to commence the legislation” on November 29th. That day is sometimes called Black Friday, one of the busiest online shopping days of the year.

Lobby to press politicians over referendum on right to home 00:05
FG and FF back transition payment for those retired before qualifying for State pension 23:57
Irish Times poll: Large majority want change of government 23:33
Animal welfare group raises concern over live exports 22:25
Two men questioned about attack where man was set on fire 22:01