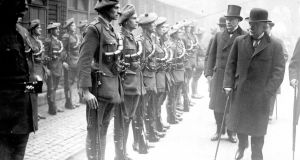 The Royal Irish Constabulary (RIC) was one of the first organised police forces in Britain or Ireland when it was founded in 1836 following the amalgamation of four provisional forces. At the same time the Dublin Metropolitan Police (DMP) was founded. Crucially, while the RIC was armed, the DMP was not.

The RIC became an overwhelmingly Catholic police force, but its top brass were invariably Protestant. It was involved in many occasions in putting down nationalist unrest most notably during the Fenian revolt of 1867, the last armed insurrection in Ireland before the Easter Rising.

The reputation of the forces varied according to the level of unrest in Ireland at the time. During the Land War of 1879-1882, the RIC earned a reputation for brutality. In quieter times, in the first decade of the 20th century for instance, the RIC became a more conventional police force dealing with the normal business of policing.

Nevertheless, the role of both police forces as guarantors of British rule in Ireland was resented by nationalists.

The situation came to the head during the Easter Rising. The first fatality of the Rising was DMP Constable James O’Brien from Co Limerick; the second was Constable Michael Lahiff from Co Clare.

The worst fatalities for the police during Easter Week were the eight RIC men killed during the Battle of Ashbourne in Co Meath, the largest engagement outside Dublin during the Rising.

The shooting was widely condemned even in nationalist circles. Both men were regarded as respectable members of the local community. McDonnell was an Irish speaker from Co Mayo and a widower with six children. O’Connell was from Co Cork.

Nevertheless, 10 days after the shooting, the Irish Volunteer newspaper, An tÓglach, declared that every volunteer had a duty “to use all legitimate methods of warfare against the soldiers and policemen of the English usurper and to slay them if it is necessary to do so in order to overcome their resistance”.

In April, Dáil Éireann declared a boycott of the police. In January 1920, GHQ gave authority for RIC barracks to be burned.

Hundreds were across the country and many in the force were left in the invidious position of taking up arms against those who were fighting for Irish independence.

In maintaining British rule they were at odds with the majority view of the Irish public at the time.

Thousands of RIC and DMP men quit their jobs. Many were Catholic nationalists who had joined up at a time when opportunities were limited and a career as a policeman offered a measure of job security at the time.

In response the British sent in the Black and Tans and Auxiliaries to bolster the role of the RIC in the thankless task of maintaining British rule in Ireland.

As the Black and Tans and Auxiliaries were hired as temporary constables, the reputation of the RIC was permanently sullied by many of the atrocities carried out by crown forces during the War of Independence.

The DMP was also targeted by the IRA during the War of Independence and seven members of its intelligence wing, the notorious G Division, were assassinated.

Both police forces were dismantled in 1922 after the Treaty was signed and no Irish Government has until now saw fit to honour those who served in either the RIC or DMP.

The decision by the Minister for Justice Charlie Flanagan to honour both forces at an event in Dublin Castle on January 17th is bound to be controversial, but it is consistent with the Government’s stated ambition to remember all those who died during the revolutionary period.

Thousands of families in Ireland have a direct connection to both the RIC and the DMP as their relatives served in them.

Mr Flanagan maintains that the vast majority of DMP and RIC were decent men doing a job that all policemen do and they deserve to be remembered.

After becoming the first Government Minister to attend a service remembering those who had died with those forces, he told The Irish Times:

“These are difficult and sensitive issues. We cannot any longer ignore them or be partisan. I believe I have a duty as Minister for Justice to police officers.”