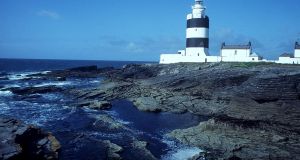 Hook Head is renowned as the oldest intact working lighthouse in the world, according to Cllr John Fleming

Dunbrody Archers turned out in force on Hook Head in Co Wexford on Wednesday to participate in a ceremony going back more than 300 years.

Chair of New Ross District Municipal Council, Cllr John Fleming explained the origin of the tradition of firing an arrow into the sea from the rocks beneath the world’s oldest operational lighthouse.

“The tradition dates from 1687 when the Mayor and the corporation of New Ross Town Council claimed their authority over the waters by travelling to Hook and shooting an arrow into the sea from Hook Head Lighthouse.”

Cllr Fleming explained that the Mayor of New Ross, casting the arrow into the sea symbolises the port of New Ross’s authority over the estuary of the Barrow and the Suir all the way down to Hook Head.

The members of Dunbrody Archers, founded in 2004 and now one of the largest archery clubs nationally, assisted Cllr Fleming in “the arrow ceremony” by unleashing a volley of arrows into the air at the historic lighthouse.

Cllr Fleming explained that Hook Head is renowned as the oldest intact working lighthouse in the world, dating from the fifth century when local monks lit fires on the headland to keep the ships at sea safe.

“Hook Lighthouse was built by the knight, Sir William Marshal and he also built the port town of New Ross along with Kilkenny Castle, Ferns Castle, Tintern Abbey and many other historical gems in the area,” he said.

“He married Isabel De Clare the daughter of Strongbow and Aoife and they became quite the medieval ‘power couple’ and it is thought that he built Hook Lighthouse to guide ships safely to his port town of New Ross.”

“The Hook Lighthouse tour incorporates 115 steps to the top of the lighthouse tower and features holograms illustrating the ancient history of the tower and the Hook area and spectacular views of the southern coast.”