Bishop says ‘culture of abortion’ would be ‘horrendous’ 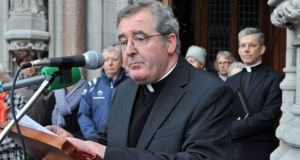 “The concept of termination was so vigorously promoted that a ‘group-think’ has come to the fore,” said the Bishop of Cloyne Dr William Crean. Photograph: Catholic Communications Office/PA Wire.

People should not focus solely on individual stories, no matter how sad and tragic they may be, when voting in the forthcoming referendum to repeal the Eighth Amendment, the Bishop of Cloyne Dr William Crean has said.

He said that while individual difficult situations faced by women and their partners can be “sad and painful”, voters should look at the wider implications of establishing what he described as a “culture of abortion as a routine medical procedure”.

It would be “horrendous to contemplate” such a development, he said.

In a letter read out at all Masses in the 46 parishes of the Diocese of Cloyne, which covers most of Co Cork, Bishop Crean said people had increasingly been drawn into an “abortion bubble, not unlike the Citizens Assembly and the Oireachtas Committee”.

He said: “The concept of termination was so vigorously promoted that a ‘group-think’ has come to the fore, whereby those who questioned the consensus were dismissed and ridiculed. This is regrettable. It has now fallen to the ordinary citizen to defend the right to life of the unborn,” he said.

Bishop Crean said the Eighth Amendment had stood the test of time since its introduction in 1983 and contrary to what its opponents have argued, it had not been too restrictive. Following the Supreme Court ruling in March, it was now the only protection for the unborn in the constitution, he said.

The amendment had been enacted to protect the unborn from “becoming victims of a liberal abortion regime like what had emerged in the UK after the 1967 Abortion Act which promised abortion in rare circumstances”.

However, he said it had led to “a shocking toll of destruction of innocent unborn children”.

Bishop Crean acknowledged that people may be confused about how to vote. He claimed some people “sow seeds of confusion by way of inviting the confused to trust them because ‘they know best’.”

He said he was convinced “by the statements of obstetricians of long standing who vouch that their care of individual women has not been restricted by the Eighth Amendment”. The Protection of Life during Pregnancy Act could best provide for difficult and tragic pregnancies, he said.

“When this debate began it started out dealing with difficult issues like rape, incest and non-viable pregnancies. What is now proposed is light years away from very rare and restricted circumstances to a proposal that provides for termination of perfectly viable pregnancies.”

Bishop Crean said that those arguing for repeal did so on the grounds of showing compassion to women in distress and compassion was a noble virtue rightly valued by Christians. However, compassion that injured another life to the point of death was “a flawed if well-intentioned compassion”.

Describing the referendum vote as “a great struggle between life and death”, Bishop Crean said that the array of groups dedicated to the provision of what he described as an unrestricted regime of abortion was hugely powerful and wellfunded. People should be aware that “the art of spin is common place”, he said.

Further payments for high-earning public service staff to cost €42m 10:02
Fishermen who rescued women off Inis Oirr save another man in River Corrib 09:32
Keeping well at work from the comfort of your home 09:28
‘The stakes are undoubtedly higher’ 08:50
Graduate programmes: embracing informal learning 08:48