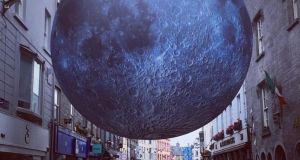 A “bridge” made of cardboard mounted on kayaks over the river Corrib and a “gargantuan” newspaper installation by Turner prize-nominated artist David Mach are among highlights of this year’s Galway International Arts Festival which kicks off on Monday.

As the Galway Film Fleadh drew to a close, and the city experienced its first rain showers in almost a month, Mach’s exhibition involving over 20 tonnes of newsprint opened at the festival gallery on Sunday.

Around the corner from the gallery,housed in the former Connacht Tribune printworks, a giant “museum of the moon” appeared at Lynch’s Castle. The lunar surface with detailed NASA imagery moves to NUI Galway’s human biology building from Tuesday.

Over on the Claddagh basin, a “ghost chapel”, as in a concrete replica of a sixth century MacDara’s island church, has been constructed by students working with Niall McLaughlin and Michiko Sumi of the Bartlett School of Architecture.

Other spectacles may include large illuminated birdmen legging it through the streets this coming Friday and Saturday, as over 700 artists and performers associated with both the 31st annual arts festival and eighth annual Galway Fringe take over the city.

Controversy over the removal of the statue of British imperialist Cecil Rhodes at Cape Town University is theme of South African production, The Fall, which opens at the Black Box Theatre in Galway this week, while a stage adaptation of Patrick White’s novel, The Aspirations of Daise Morrow has been booked for the second week of the programme.

Two Australia physical theatre companies promise heart-thumping gasps, while five Galway-based stage productions include two from Druid Theatre, one collaboration between An Taibhdhearc and the Abbey, and one each from Decadent Theatre and Galway Youth and Community Theatre.

An extensive music programme ranges from The Stunning and Walking on Cars to Camille O’Sullivan to All Our Exes Lives in Texas, Le Galaxie and The Flaming Lips, the China National Traditional Orchestra, and the RTÉ Concert Orchestra.

Migration, the conflict in Syria and the Europe-wide issue of homelessness are among issues explored, and the festival’s “First Thought” talks will be opened by President Michael D Higgins next weekend.

The talk programme curated by historian Catriona Crowe will include an exploration of Europe’s “fault lines” with Liz Fekete, Institute of Race Relations director, while Catherine Corless will speak about the Tuam mother and baby homes research.

Prof Diarmuid Ferriter will contribute a few“first thoughts” on his work on offshore islands; and an analysis of the housing crisis will include panellists Niamh Randall of Simon and former Irish Times environment editor Frank McDonald.

Eyre Square will be transformed into a “festival garden”, and will host the Miracoco Luminarium maze, while the Corrib cardboard bridge is one of two “live builds” which French artist Olivier Grosstete will direct on his return to Galway for a second year. Once again, participants will be invited to put as much energy into destroying the collaborative creations the following day.

The eighth Galway Fringe Festival drama programme includes an adaption of Chaucer’s pilgrim classic, The Miller’s Story, Calamity Theatre’s Apoptosis, The Crooked Hook’s A Tempest, and a one woman play by Eve O’Mahony on the life of Brigid Cleary, who was burned to death by her husband in Tipperary in 1895.

Artists from Rijeka, Galway’s “sister” European Capital of Culture 2020, have exchanged letters with their west of Ireland counterparts, which will be exhibited in both cities – the Croatian letters being in the Galway City Gallery in New Dock Street.