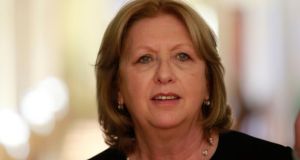 Former president Mary McAleese: “The church can become an enormous power, a surging power, a tsunami of good in the world.” Photograph: Nick Bradshaw

Former president Mary McAleese has said she likes the fact that Pope Francis is “an argumentative pope.” She liked it that he encouraged debate within the Catholic Church and wasn’t afraid of divergence.

“He’s an argumentative pope and he likes you to argue back”, and that made him very different from either of his immediate predecessors, Benedict XVI or John Paul II, she said. However, he could also be “puzzling . . . he says one thing one day and a contrary thing another day”, she said.

But his track record on women was “poor”, she said. He had promoted a handful of women but given them no more voice.

She felt that ordaining women had ceased to be a relevant question, even if theology preventing this was “thin”. The main issue was how the church could hope to represent women when they had been effectively disenfranchised.

“Tell me how do you propose to allow the 600 million women who are members of the church to make a significant contribution to doctrine, to the interpretation of doctrine, to dogma, to church teaching, given that they can’t do it the conventional way?” she asked.

The overriding problem with the church was that it operated as an empire in an age when that model of governance was long since outdated, she said. At the centre was a small all-male cohort who acted as “legislators and judges and juries” as well as being “purveyors of doctrine”.

The problem was a structure in which the men at the top spoke down to the people at the bottom. But that way of communicating was becoming increasingly problematic for church leaders because the people at the bottom had found their voices and were speaking up, and cardinals and bishops were not able to control that – as in the recent abortion referendum in Ireland, she said.

In an interview with the Tablet magazine, she compared the church to a plane with metal fatigue that needs to be grounded and fixed.

“It’s been flying long hours and delivering people safely and doing a good job, but now there are a million little cracks that have not been observed and have not been tackled or addressed, and it wouldn’t take an awful lot to throw a spanner in the works and for it to fall out of the sky,” she said.

It needed “to be looked at very intently to identify what parts need to be replaced”, she continued.

As a committed Catholic, she hoped the church would galvanise itself to be an agent of real change, change that would improve the lives of such as young women and gay people.

“The Catholic Church can become an enormous power, a surging power, a tsunami of good in the world and would have across five continents a fantastic influence that could open up new feelings of grace,” she said.

What it needed first, though, was a period of self-reflection and self-criticism, qualities it had not prioritised for a long time, she said.