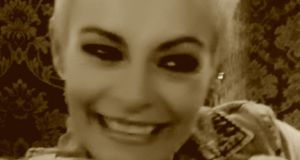 Áine Morgan, a singer from Loughrea

When Co Galway musician Áine Morgan was diagnosed with advanced cervical cancer 2½ years ago, she wasn’t given too much time.

Ms Morgan, who has performed with musician Sean Keane and others, had previously survived a brain aneurism condition and was getting her life back on track.

“I had no signs, no symptoms ,” she says. “Six months before I was diagnosed, I went into accident and emergency with a severe pelvic pain, and had a CT scan, ultrasound and blood tests – and nothing showed up,” she says.

After cervical cancer was confirmed, she underwent radiotherapy and was offered palliative care, with a prognosis of one to two years.

“You can either be very positive, or let it engulf you, and I let it engulf me for about three weeks,” she says. “Luckily, a switch went on, and I went back working part time, and found that my rather warped sense of humour helped – along with a brilliant medical team.”

Ms Morgan is not one of the group of 221 women who received incorrect smear test results through the CervicalCheck programme.

However, she has been inspired by the courage of Limerick woman Vicky Phelan, whose refusal to sign a confidentiality agreement after her High Court settlement exposed the screening system failures.

The Loughrea singer, who is in her early 40s, believes the immunotherapy drug Pembrolizumab, which Ms Phelan has responded well to, could offer her a lifeline, if only she could be approved as a candidate for a clinical trial.

She is undergoing further radiotherapy treatment at University Hospital Galway, as she has stopped responding to the medication she was on.

“I can cope with incurable cancer, if I can just get a chance at life,” she says. “The problem is that this drug costs €8,500 for every three-week dose. And though I can sing in front of 1,000 people, I find it hard to speak about my situation, and to explain that there are many women like me who would really like to be included in clinical trials.”

She believes Minister for Health Simon Harris is supportive and “doing his best”. The Minister promised to facilitate access to the drug to those women who were given incorrect smear test results.

Pembrolizumab is reimbursed by the HSE for patients with certain forms of melanomas and lung cancers who meet specific criteria, and has been made available to about 300 patients with other cancers through clinical trials.

Ms Morgan is looking at “every option”, including qualifying for clinical trials for other immunotherapy drugs in Europe and the US.

“Time is really not on my side,” she says.

The Sunday Business Post reported on Sunday that the manufacturer of Pembrolizumab, MSD, said it had no plans to fund a trial of the drug in Ireland. The company said it needed to carry out a broader and more comprehensive trial in order to secure regulatory approval in Europe.

Consultant oncologists Prof John Crown and Dr David Fennelly, who work at St Vincent’s Hospital in Dublin had made a proposal to Mr Harris to run a trial of Pembrolizumab for women in Ireland with advanced cervical cancer, not just those affected by the current CervicalCheck controversy. This would involve the Government paying for the drug.

A number of musicians, including Sean Keane, are taking part in a fundraising benefit gig forMs Morgan’s treatment in the Loughrea Hotel on July 26th, with tickets costing €20, and donations can also be made through gofundme.com/save-aine.