Bells ring out for local hero in west Cork church 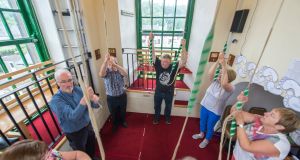 A west Cork cleric is offering people the opportunity to honour the story of Irish patriot and GAA figure Sam Maguire through bell-ringing.

Church of Ireland Rev Cliff Jeffers is urging people who are interested in learning this traditional skill to contact him about attending his weekly tutorials at the bell tower in St Mary’s church in Dunmanway.

The move follows the installation of nearly €60,000 worth of church bells at St Mary’s a year ago – the Sam Maguire Community Bells, named, like the sought-after GAA trophy, after the famous patriot from Dunmanway.

In 2016, following centenary celebrations of the 1916 Rising, St Mary’s Church of Ireland began to look at ways to commemorate Sam Maguire, the legendary sportsman and locally-born patriot who is buried in its churchyard.

The bells were installed last year at a cost of €58,000, which was funded through a mix of local fundraising and donations from organisations like the GAA, Cork County Council and church charities.

“We wanted to remember his story and the idea of the bells was to introduce something that was interactive in the telling of the story,” said Rev Jeffers.

The project is intended to bring people together in the community and offer them the chance to learn a new skill, as well as promote economic activity in Dunmanway through highlighting its strong links to Sam Maguire, who, while working in the postal service in London, became a crucial link in the intelligence-gathering operations of the Irish Republican Brotherhood.

Maguire was born in the townland of Mallabraca near Dunmanway in 1877 and was a member of the Church of Ireland. While living in London, he captained the London Hibernians Gaelic football team to several All-Ireland finals between 1900 and 1904. The Sam Maguire Cup was designed and presented to the GAA in 1928 in his honour after his death in 1927.

So far, Rev Jeffers has trained a wide range of people, from children as young as 10 and transition year students from the local Maria Immaculata Community College – the teenagers earned a Gaisce award for their efforts – to adults from the parish and local community.

Rev Jeffers said the 20-odd community bell-ringers were becoming very proficient at their new skill. “They can ring the bells on Sunday mornings, and for special occasions such as weddings or community events like the new year or St Patrick’s Day – or even the local football team winning the county final,” said the reverend, who will present a video documentary on the story of the bells at the West Cork History Festival on August 16th-19th.

The festival will also feature a talk by author Kieran Connolly on his recent book Sam Maguire, The Man and the Cup.