Baptism barrier: there may be other ways, says Catholic Primate 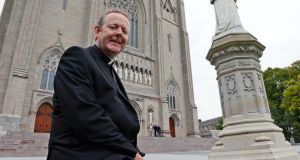 Baptism barrier: “I wouldn’t be married to it myself, personally,” said Eamon Martin. Photograph: Eric Luke

The Catholic Primate of All Ireland, Eamon Martin, has said there are “probably other ways” to protect Catholic education in State schools besides the so-called Baptism barrier, which limits enrolment to members of the church.

He said that although he understood that a “very small number of schools” in a “number of small pockets of the country” used the barrier to ensure that baptised Catholics gained preferential access to the institutions their communities had helped to establish, “I wouldn’t be married to it myself, personally”.

Dr Martin, who added that in his own diocese he “never had the situation where a school was using such a criterion”, said he didn’t regard the Baptism barrier as “critical to Catholic education. I think Catholic education can be open to all”.

But he also said that many people involved in Catholic education “would just love from time to time to hear a public representative, a TD or a Minister commend the work of Catholic education. We have fantastic Catholic schools all around the country,” and “we have very many fantastic public servants in many different areas of life who have gone through Catholic education, and I hope that they look back and feel that it was good for them.”