Bank holiday weather: Temperatures to dip on Saturday and Sunday

Spell of unsettled weather is likely to extend into next week 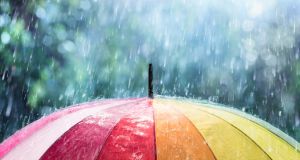 Heavy showers are forecast for this Friday. Image: iStock

The bank holiday weekend weather will be mixed despite a promising start.

After the fresher weather of late, Thursday and Friday will be both warm and humid days. Highs of 22 degrees will be recorded on Thursday and 23 to 24 degrees on Friday.

Thursday will be wet in the northern half of the country and dry in the southern half. Friday will see sunshine most places, but there will be heavy showers in the muggy weather.

After that, it will be back to the soggy, unsettled weather we have been having over the last month – extending into early August.

Saturday and Sunday will be notably cooler than previous days with westerly winds meaning temperatures will only be between 15 and 19 degrees.

On the bank holiday Monday, rain is forecast across the country with some heavy spells expected.

Met Éireann forecaster Linda Hughes said the Irish weather is under the influence of an Atlantic system at the moment that is bringing unsettled weather.

1 How one couple’s weekend away resulted in 30 Covid-19 cases
2 Taoiseach tells TD to ‘cop on’ over criticism of contact tracers asking about pubs
3 Miriam Lord: Government’s latest comedy of errors offers little to laugh about
4 ‘Mathematics seems too often to be about learning rules’
5 Coronavirus: 429 new cases as vigilance urged amid rises across the country
Real news has value SUBSCRIBE