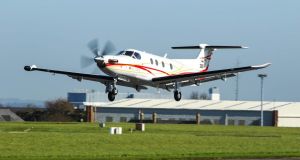 The PC-12 was acquired through a fast-track process to aid in the State’s response to the virus, including transporting Covid-19 tests to Germany when there was not enough HSE capacity. File photograph: Military.ie

The Air Corps’ newest plane, acquired to aid in the response to the coronavirus pandemic, was used over the weekend to repatriate Irish troops from west Africa.

This was the longest mission flown by the PC-12 aircraft since it was acquired in April for €5.2 million.

The aircraft and crew of the Air Corps 104 Squadron transported two officers and cargo to the Minurso mission in Laayoune, a city in the disputed territory of Western Sahara, where they are to act as UN observers. They replace two officers who were flown home on the aircraft on Saturday via a refuelling stop in the Canary Islands.

The returning officers will now self-isolate for 14 days in line with HSE guidelines.

The PC-12 was acquired through a fast-track process to aid in the State’s response to the virus, including transporting Covid-19 tests to Germany when there was not enough HSE capacity.

104 Squadron continues to successfully adapt the @Pilatus PC-12 to our operations as an increased #aircapability for @defenceforces and the #Irish State#StrengthenTheNation #Military #AirForce pic.twitter.com/YvE4zSsXqA

The Defence Forces will also use the craft as a troop and cargo transport for small UN and EU missions.

Before its acquisition, the Defence Forces had to charter private planes or rely on co-operation from other country’s air forces to rotate troops.

It will still have to do this for larger missions such as Unifil in Lebanon, but for smaller missions it is intended to use the nine-seater PC-12, “especially given the current nature of the private airline industry”, a spokesman said.

Last weekend’s mission “highlights the growing capability of the PC-12 as a versatile aircraft which is capable of supporting Defence Forces troops deployed on UN peacekeeping missions”, a Defence Forces spokesman said.

It is the second time the PC-12 aircraft has been used to rotate troops. It was also deployed in May to transport a small number of Irish soldiers from Kosovo.

Senior Defence Forces officers have recently raised concerns over Ireland’s lack of a dedicated strategic airlift capability to move troops in and out of peacekeeping and observer missions.

The issue was highlighted at the height of the pandemic when the Defence Forces faced difficulties in rotating troops from Lebanon and the Democratic Republic of Congo.

The Defence Forces intends to receive three more PC-12 aircraft in the near future. It is understood the acquisition of a bigger aircraft for transporting larger troop numbers is also being considered.