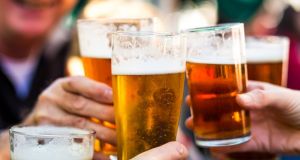 There was a drop in alcohol consumption during the second quarter of 2020, compared to the same period last year.

Figures from the Revenue Commissioners show an overall decline of 7.7 per cent when compared to the equivalent April, May and June period in 2019.

The most dramatic fall came in the beer category, with consumption down by 17.4 per cent. Spirits are down by almost 10 per cent, while cider declined by 9.4 per cent.

Wine was the only category to show an increase in consumption, with a 10 per cent rise on the same quarter last year.

Rosemary Garth, chairwoman of the Drinks Industry Group of Ireland, said the figures confirm “the dramatic impact the pandemic has had on the hospitality sector”.

“For the 210,000 people who depend on pubs, hotels, restaurants and manufacturers for their livelihoods, the implication is stark,” she said.

“As it stands, over half of the country’s pubs remain closed. For those who have reopened, they are doing so at capacity levels which are half of what they had pre Covid-19. Even if guidelines change, we anticipate the second half of the year will see a reduction in sales by as much as 50 per cent in the sector. We estimate that over 20,000 jobs are vulnerable.”

Ms Garth said the July Stimulus plan unveiled last week “was a start, but it is a long road back”.

“We need to think and act fast, not least on measures like taxation which can have an immediate impact,” she added.

“Reducing excessively high excises taxes on alcohol is one such measure and October’s budget is the time for such a reduction. We need to recover and protect these community businesses who are up against it for the long-term.”

The Licenced Vintners’ Association meanwhile has claimed the extended closure as a result of Covid-19 will see at least 2,500 permanent redundancies and the closure of 10 pubs in Dublin.

The LVA said one-in-five jobs in the pub sector will be lost as a result of the closure of all licenced premises since March 15th.

The LVA has indicated there may also be further significant job losses ahead, with almost one in three Dublin pubs yet to reopen and any pubs that do open operating at 50 per cent capacity or less.

The association has warned that there will be further redundancies as many city centre pubs are struggling because of the absence of office workers, tourists and restrictions on public transport.

To date three pubs have publicly announced that they will not be reopening - the Queens in Dalkey, The Donaghmede Inn in Donaghmede and The Cardiff Inn, Finglas.

LVA chief executive Donall O’Keeffe said the seven other pub owners had informed them privately that they do not intend to open their doors on August 10th.