Ballyhaunis held up as example of town that has ‘embraced diversity’ 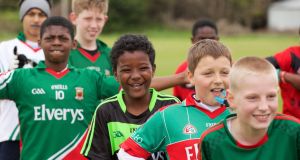 Children at a community event at Ballyhaunis GAA club in 2015. Photograph: Keith Heneghan

Ballyhaunis is a positive example of a rural town that has “embraced diversity,” Minister of State for immigration and integration David Stanton has said.

The Co Mayo town was found to be the most diverse in the country in the 2016 Census, with migrants from 20 different ethnicities making up more than half of the population.

“Ballyhaunis is indeed a town that has embraced diversity in a positive and inclusive manner,” Mr Stanton said, speaking at an integration seminar in the town.

His comments come as several towns and villages have recently opposed direct provision centres housing asylum seekers being located in their areas.

The controversy in Oughterard led to the developer pulling out of his decision to have a former hotel reopened as a direct provision centre in the area.

The country’s 38 direct provision centres are currently at full capacity with 6,000 residents, while a further 1,400 asylum seekers are in emergency accommodation. There are about 800 people in direct provision who have been granted status to remain but are unable to leave due to difficulties finding housing.

Ballyhaunis has had a direct provision centre catering for around 500 asylum seekers in the small town since 2000.

Ballyhaunis “has been a destination for migrants from a variety of countries over many years and has enjoyed a successful history of intercultural engagement,” Mr Stanton said.

Speaking at the event, Mr Ring said “Ballyhaunis is a tremendous example of a mixed community, living, working and co-operating together to create a fantastic place for people to live and bring up families.”