Explainer: How would the Brexit deal's dual customs plan work? 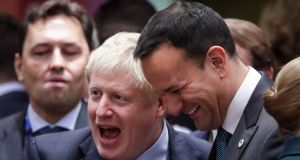 To avoid a hard border in Ireland, the new Brexit deal means Northern Ireland will remain in the UK customs territory legally but practically it will be under EU customs rules, with checks falling between the North and Britain.

To understand how this would work, imagine you are a Northern Irish firm importing bolts.

When your bolts arrive in Larne or Belfast, they will be checked and EU tariffs will be applied and collected by the UK and paid on to the EU. That is unless they are personal property and they are a final product and not going to be used in the manufacture of something else.

In addition, EU tariffs could be waived if they meet criteria yet to be determined by a “joint committee” of EU and UK officials who will have to figure this out over a 14-month transition period.

These still-undecided criteria must, the proposed deal says, consider the final destination and use of a good, its nature and value, its movement and the incentive for not declaring the onward movement of the good into the EU, in particular incentives resulting from duties not being paid to the UK.

It is presumed that if you can prove the bolts are being sold in Northern Ireland, then you will be able to claim the EU tariff back. If your bolt is exempt under the criteria, it can either enter the North tariff-free from Britain or at the UK tariff for bolts from the rest of the world, presuming it is lower.

Things become complicated if you import your bolts from a country outside the UK or EU and the item is “at risk of subsequently being moved into the [European] Union”. For example, if you are going to use your bolts to make another product, say a train set, in Northern Ireland to be sold on into the EU.

This would allow Northern Irish businesses to benefit from any free trade agreement that the UK could sign with China after Brexit – a key reason for Boris Johnson’s decision to take all of the UK out of the customs union.

To complicate things further, if your bolts do not satisfy the criteria to be exempt from EU tariffs, the UK could “pay” it on your behalf – up to the limits of EU state aid rules – by either waiving or rebating it.