‘Brexit is pushing the more liberal unionists down a different path’

Could disillusionment with the DUP’s Brexit strategy cause it to lose swing votes? 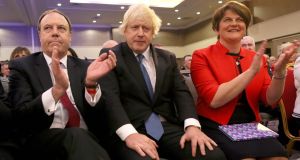 In Basil’s, a greasy-spoon cafe around the corner from Nigel Dodds’ constituency office on the Strand Road in north Belfast, Bill McClelland explains why locals hold the concept of the United Kingdom so dear.

“It’s more to do with heritage and how you were brought up, by your fathers and uncles,” he says. “We’ve always been part of GB, and we want to stay in it.”

In his house nearby, John (who does not want his real name used due, he says, to paramilitary activity in the area), says the DUP “done what they had to do. If they hadn’t, people would have turned against them.”

Having grown up during the Troubles, John has seen his fair share of violence. As a child he saw two soldiers and a policeman killed, and a neighbour shot dead when he lived in the Tiger’s Bay area of the city. “A sniper blew his head off … [there were] brains lying all over the place.”

Growing up in such violent times, he says, has made preserving the union more important to him. “It’s my country, and I don’t want to be sold down the river.”

The area around the Strand Road is staunchly unionist and firmly low-income, but the wider electoral picture in the north Belfast constituency is less clear. Dodds has seen his majority eroded in recent years, partially due to Sinn Féin’s selection of John Finucane, son of murdered solicitor Pat Finucane, to run in the constituency. Finucane, a candidate firmly situated in the civil rights tradition, appealed to moderate nationalists who would usually vote for the SDLP.

DUP strategists say it would take a very bad day for the party for Dodds’s seat to come under pressure, but they acknowledge there is a moderate nationalist constituency of between 4,000-5,000 people in north Belfast who could be persuaded to vote for a Sinn Féin candidate. Dodds could fall back on a support base that stretches beyond the DUP base and relies on his record locally and in Westminster – as well as an anti-abortion vote.

Moderate, wealthier unionists could be turned off by hard-core Brexit rhetoric. Overlooking Shore Road is Fortwilliam Golf Club. Like a lot of the residents of this more comfortable part of north Belfast, honorary secretary Michael Graham is a Catholic and a moderate nationalist. He sees his unionist friends, however, becoming increasingly uncertain over the DUP’s Brexit strategy, which in turn is changing long-held political views.

“One of the things I’m finding about Brexit is it’s pushing the more liberal unionists down a different path than perhaps they were on before,” he says. Now, over pints, his Protestant friends discuss and debate what a ‘new Ireland’ would look like – not an extension of the Republic, but a new constitutional and political entity. “This is my Protestant friends talking to me in a language they have never used before,” he says. “To them, it’s unfathomable that the DUP should take that line of action to maintain their precious union,” he says.

However, DUP figures disagree. Philip Brett, a DUP councillor in the area who works with Dodds and was in Westminster during the dramatic hours after the deal was announced on Thursday, says: “This is one of the few issues that unites unionists from all perspectives.”

Nonetheless, Prof Duncan Morrow of Ulster University says the DUP could be vulnerable. “At the moment, part of the problem is they put all their eggs in the one basket, which has failed and come under huge criticism from the other unionist parties,” he says.

Anything that drives the unionist vote towards a new home or risks depressing turnout could complicate the electoral picture for the DUP further, Prof Morrow says. “You would have to expect the core will remain with the party in some areas … but it may be that you don’t see lots of people voting, but staying at home due to general disillusionment,” he says.

“There are so many uncertainties, but it is clear the DUP policies on Brexit were unpopular in general with a large part of their swing vote, and it’s hard to see how they’ll get that back.”