President Higgins pays tribute to Cork Chamber for its role 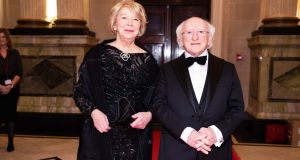 Ireland needs balanced regional development to guarantee a sure economic future given the uncertainty caused by Brexit, and representative bodies such as Cork Chamber have an important role to play in that regard, said President Michael D Higgins.

The chamber has been an important champion for the city in terms of promoting economic growth over the last two centuries and particularly since independence, President Higgins told some 1,000 guests at the Cork Chamber Annual Dinner marking the body’s 200th anniversary.

“For the first century of independence, your chamber has been an important advocate for the economic and industrial development of Cork, from the modernisation of Cork Harbour and the construction of Cork Airport, to the expansion of commercial education and support for new undersea cables.

“That has been vital, not only for Cork but for Ireland . . . I know how important vibrant and sustainable regions are for the health of our economy and the prosperity of our people. We perhaps need to rediscover some of the lessons of regional economy policy that we learned in our own past.”

“We need real regionalism with the capacity to ascertain possibilities and difficulties, establishing policy, make investment choices and be accountable to the people – that will be all the more important as we confront the uncertainty caused by the decision of the UK to leave the European Union, ” he said.

“Though the outcome of events in Westminster remain in doubt, we can be sure our economic future will only be certain if it rests on a vision of balanced economic development, one conscious of, and capable of rising to, the ecological challenges presented by climate change and the loss of biodiversity.”

In a wide-ranging address in Cork City Hall, President Higgins traced the history of Cork Chamber and the contribution it has made to both the business life of the city and region through some of the important events which forged the Irish nation.

President Higgins recalled that when the founders of the chamber first met in Shinkwins’ Rooms, on the site of the Victoria Hotel on Patrick Street, in 1819 just 18 years after the Act of Union, they were responding to political events that challenged Cork’s growing trade with France, Spain and the Americas.

“Cork could not freely compete with Liverpool, Bristol or any other English city. The Atlantic market was jealously protected by the English parliament, and Cork was prohibited from selling live cattle or from trading directly with the English colonies of the New World,” he said.

“The economy of Ireland was shaped by laws and regulations made by a representative body in London in which the Irish people – no matter how great their status – had no representation, and upon which they could not exercise any influence.

“In response to the restrictions placed on Ireland in the 17th century, the merchants of Cork turned towards three new products, the production of salted beef, butter and woollen yarn, commodities which would feed and clothe the French Caribbean and the navies of Europe for generations.

President Higgins recalled that the men who formed the Cork Chamber of Commerce reflected the unique economy of Cork, being butter merchants, tallow chandlers, woollen manufacturers and food processors but they were also for political change in the city and in the country.

The chamber threw its weight behind the Liberator, Daniel O’Connell and his campaign for Catholic emancipation and the tradition of support for the nationalist ideal was sustained during the Land War and reached its most potent expression when Charles Stewart Parnell was elected chamber president.

Later, as Cork played a pivotal role in the fight for independence with two of its Lord Mayors, Tomas Mac Curtain and Terence Mac Swiney making the ultimate sacrifice, it was worth noting that their immediate successor, Barry Egan was not only Lord Mayor of Cork but also Chamber President.

“Only two months after the death of MacSwiney, both City Hall and Barry Egan’s business would be set alight by Auxiliaries and Black and Tans, who attempted to set the whole city on fire,” said President Higgins as he recalled the seismic event in the history of Cork and its business life.