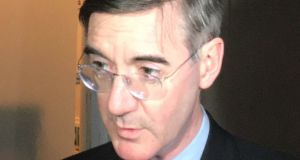 Northern Ireland Conservatives have questioned why Jacob Rees-Mogg addressed a DUP fundraiser, despite having never attended any of his own party’s events in the North.

The outspoken Brexiteer and European Research Group chairman appeared at a Democratic Unionist dinner at the Tullyglass Hotel in Ballymena, Co Antrim on Thursday night.

Mr Banks praised the DUP as “fundamental” to Brexit, claiming if it was delivered, it would be “because of the DUP”.

But the only elected Tory in Northern Ireland said he would expect Mr Rees-Mogg to have supported his own party, rather than another.

Councillor David Harding said he understood that the chairman of the Northern Ireland Conservatives “will be having a word” with Mr Rees-Mogg about the matter.

Mr Rees-Mogg was welcomed to the venue by North Antrim MP Ian Paisley, and defended his attendance as “supporting the Conservatives’ coalition partners”.

But Mr Harding questioned why he was not supporting his own party.

“Obviously, as a Conservative, I would expect members of Parliament for the Conservative Party would support their own party,” Mr Harding told the Press Association.

“But that’s maybe a reflection on the individual. He made the choice and that’s up to him.

“Although I wouldn’t be surprised if the chairman of the party in Northern Ireland wasn’t going to have a word with Jacob Rees-Mogg.”

The Democratic Unionists and the Conservatives have been involved in a confidence and supply deal since the 2017 General Election.

Mr Rees-Mogg told the DUP event the Malthouse Compromise was the UK’s best route to leave the EU with a “sensible” deal.

This proposal would extend the transition period for a year and protect EU citizens’ rights, instead of using the backstop, as the way to do that.

Mr Rees-Mogg told media representatives in Ballymena that he did speak to the Northern Ireland Conservatives.

A Northern Ireland Conservatives’ spokesman confirmed they did talk to Mr Rees Mogg regularly, adding “as we do with many Conservative MPs”.

“I believe he has been invited by one of our associations in the past but has not yet addressed an event in NI,” he said.

“It is also fair to say that it is only in recent times that he became the sort of well-known MP that would be asked to address meetings.”

A number of other high profile Conservative MPs, including David Lidington and Sajid Javid, have spoken at NI Conservative events.

“Sadly on occasions, often in an honest defence of their principal political views, politicians find themselves making odd alliances and standing elements of their own political logic on its head,” he said.

“They make themselves look foolish when they do so.”

Mr Rees Mogg is not the first Conservative MP to headline a DUP event, and is following in the footsteps of several high-profile representatives.