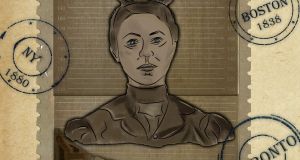 The Bad Bridget podcast tells the story of the many Irish women who were regularly imprisoned in the US and Canada. Illustration: Ashleigh Neill, @PhDcartoon

Two Northern Ireland-based historians have launched podcasts about the “Bad Bridgets” – the many thousands of Irish women who emigrated to North America from 1838 to 1918 ended up in prison for a range of offences from pick-pocketing to murder.

Dr Elaine Farrell of Queen’s University, Belfast, and Dr Leanne McCormick of Ulster University vividly tell what is the largely untold story of the many Irish women who were regularly imprisoned in the US and Canada.

The academics coined the term “Bad Bridgets” for their study which puts a dent in the narrative of how Irish emigrants and their offspring became “presidents, war heroes, men and women who built industrial cities, served its people, or educated its children”.

“No doubt we have only discovered a fraction of the cases, but those we do have demonstrate that image of Irish women as sexually virtuous, good wives, good mothers and obedient domestic servants was not quite the lived reality for all,” they write in their overview to the podcasts.

Poverty, despair and loneliness often were factors in the crimes, although some characters were very recidivist in nature.

In one of many stories they tell about Margaret Brown, known as Old Mother Hubbard, whose exploits were featured in an 1886 publication, Professional Criminals of North America, and whose career spanned more than 50 years, working in at least six states.

“She befriended women shoppers, admired their purchases, and dipped her hands into their pockets and purses,” said the academics. “She also tried to escape from a prison in Chicago in 1877 by tying bedsheets together and fell several stories.”

She was not expected to live but survived to pick a few more pockets.

Dr Farrell and Dr McCormick concentrate their stories on Boston and New York where “Bridget” became a word in American English meaning “housemaid” so numerous were Irishwomen of that name employed in the role. While many of the more than five and a half million migrants who departed Ireland for North America did well, others did not.

For instance in Boston between 1882 and 1915, 12,514 women were admitted to the House of Correction, and of those 35 per cent were Irish women at a time when the total Irish population in Boston was around 17 per cent.

“In fact we were completely overwhelmed by the sheer number of Irish women in records relating to crime and punishment,” say the historians.

They add that Irish people, as described in the New York Evening Express in 1854, often were viewed as part of the “scum of Europe”.

An editorial in the Chicago Post in 1868 was even more explicit: “The Irish fill our prisons … Putting them on a boat and sending them home would end crime in this country.”

Drink was a big contributing factor to the troubles of Irish women. Those in Toronto prison in 1868 included Mary Watson and Bridget Golding, both aged 10 and arrested for being drunk, with Mary having had nine previous arrests, as well as Ann Healey who was 85 and had been arrested 33 times.

The academics also found that pregnancy outside marriage could lead to Irish women engaging in criminality and ending up in destitution.

Another sad tale was about Catherine O’Donnell who in 1889 “sought the shores of America to give birth to an illegitimate child, her lover, (a bookkeeper in Ireland) deserting her”.

A newspaper said that she belonged to “an aristocratic family in Ireland”. That may have been an exaggeration, according to the academics, but the fact that she was educated in a convent until she was 19 and that her father owned around 200 acres indicated she came from a wealthy background.

She was charged with murder over the death of her 12-week-old baby in Boston and ultimately served a year for manslaughter. She said her infant died after she wandered in the cold for two days with the baby in her arms. The prosecution said the baby died from drowning.

“The ‘new world’ seemed to offer unmarried women an opportunity to conceal their pregnancies from their families at home or, when families knew about it, offered an opportunity to preserve the family reputation,” write Dr Farrell and Dr McCormick, who are also planning a book about the Bad Bridgets.

Many Irish women also were imprisoned for prostitution. One 19th century study found that of the 1,238 prostitutes questioned who were born abroad, 706 (more than 57 per cent) were Irish. One of them, Bridget Bell, a 13-year-old servant, was convicted of visiting a “disorderly house”, a brothel, in 1886 and sentenced to 12 months in prison.

In 1885 New York, a young Irish servant who had migrated from Ireland only a week before had a lucky escape from a stretch behind bars. She was walking to church when she encountered a group of women she believed also were going her way.

“She ended up in prison because the group of 37 women were in fact sex workers arrested for soliciting who were on their way to the police court. The young woman was ‘detained as a prisoner until her employer came and vouched for her’.”

The Bad Bridget podcasts are presented by Dr Farrell, who is originally from Sligo, and Dr McCormick from Ballymoney, Co Antrim, with some of the extracts read by Siobhán McSweeney, Sister Michael in Derry Girls. It is available on Spotify, Apple and other podcast providers.