HSE confirms that less than one third of 600,000 available doses administered 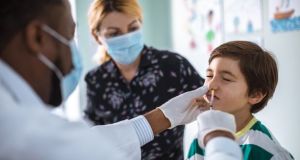 The nasal flu vaccine is being offered for free by the HSE this year for the first time, although it has been safely in use in Canada and the UK for a number of years. Photograph: Getty Images

Hundreds of thousands of nasal flu vaccines which are available free of charge for children in GP clinics will go out of date in mid-January because of a poor uptake.

Some 600,000 doses were bought by the HSE this year and 180,000 are known to have to have been used, although it is likely that the real number used is higher because of a time-lag in record-keeping.

The nasal spray – not an injection – is being offered for free by the HSE this year for the first time, although it has been safely in use in the UK and Canada for a number of years.

The HSE said it was “important for parents to come forward now to get their children vaccinated”, though there is no evidence – unusually – that influenza viruses are currently circulating.

Doctors say giving the vaccine to children will protect older adults as influenza circulates among children more than adults.

They said injected supplies of flu vaccines were scarce.

In the last decade nearly 5,000 children have been admitted to hospital with the flu, 183 of these needed intensive care and 41 died.

“People forget that flu can be a serious illness for young children,” said Dr Nuala O’Connor.

On Friday general practitioner Dr Maitiú Ó Tuathail said the uptake amongst children “remains incredibly low”, adding“if they’re not used they get dumped. It’s tragic that this is happening.”