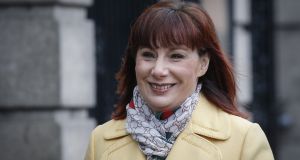 Minister of State for Special Education Josepha Madigan has she will use new legal powers to ensure additional special classes are provided. Photograph: Crispin Rodwell

At least seven primary schools in south Dublin have agreed to open classes for children with special needs in the current school year following a direction from the Minister for Education Norma Foley.

As a result, about 30 children who do not have a school place will be able to join special classes in these mainstream schools.

However, campaigners say the additional places do not go far enough and dozens of school-age children in the area with conditions such as autism and other learning difficulties still do not have appropriate school places.

They say many are availing of home tuition or are forced to travel long distances across the city in rush-hour traffic to access school places outside their community.

Minister of State for Special Education Josepha Madigan has said every child has a right to an education and that she will use new legal powers to ensure additional special classes are provided.

So-called Section 37 legal notices were sent to a total of 39 schools during the summer demanding that they provide special needs classes.

A second formal notice was sent to 25 schools just over a month ago, again requiring schools to open places for children with special needs in the current school year.

The additional places that have been pledged in recent days have sparked a mixed response from campaigners.

The Autism Equality Dublin Bay campaign group - based in the Dublin 2 and Dublin 4 areas - said the area will remain among the worst-served in the entire country.

Two new classes are to be established in the Dublin 2 and 4 areas which has 11 primary schools which cater to more than 3,000 children.

“The two new classes will cater for only 12 children out of 3,000 students. It does not meet demand and children will continue to be bussed out of their community,” a spokeswoman for the group said.

She said the legal process had the potential to make a real difference to children with additional needs and their families across south Dublin, however, the process was “not thorough and lacked planning”.

The Involve Autism group, which is campaigning for places in the Dublin 6/6W area, said the the process will likely lead to only two additional places.

It says the lack of special class places amounts to “segregation” and is failing the most vulnerable students of all.

While seven schools responded positively to the latest notices, others have signalled that they will be able to open special classes at a later date.

Other schools have said they do not currently have room to accommodate a special class or have cited other reasons such as concerns over a lack of resources and support for special education.

In correspondence with the department, many of these schools have expressed frustration over what they said was a lack of contact with the National Council for Special Education, even after signalling they were prepared to open classes.

Others also said they were disappointed at the suggestion that they were not welcoming of special needs children when “nothing could be further from the truth”.

In the case of City Quay National School in Dublin 2, for example, the school said it had responded positively to a request to open a special class in February 2019, yet received no reply until recently.

“Minister, talk is cheap and I ask the department to practice what they preach, have trust in our school and let us open an ASD class at a pace and manner that is in the best interests of all stakeholders,” the school said, in a letter to the department.