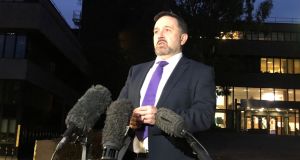 Robin Swann on Sunday said there were ‘a number of crucial days left’ of the current lockdown measures and people needed to stay at home and minimise their contacts in order to ‘fully maximise the benefit from these’. Photograph: David Young/PA Wire

The North’s health minister has warned he will not hesitate to immediately recommend a further tightening of restrictions if the number of coronavirus cases rises and threatens to overwhelm the health service.

The current “circuit-breaker” lockdown restrictions are due to be eased on Friday, and the First Minister, Arlene Foster, said last week that there would be no new restrictions before Christmas.

Robin Swann on Sunday said there were “a number of crucial days left” of the current lockdown measures and people needed to stay at home and minimise their contacts in order to “fully maximise the benefit from these”.

With the first Covid-19 vaccinations due to be given in Northern Ireland this week, Mr Swann said people were entering the festive season “with hopes and fears co-existing side by side” and while there was “great optimism” because of the vaccine, there were also fears it might lead to people letting their guard down.

“While we are entering a new phase, the pandemic is far from over. This is a time for maximum self-discipline – a time for us all to be ultra-vigilant,” he warned.

Earlier on Sunday, Department of Health said another 11 people have died with Covid-19 in Northern Ireland and a further 419 people tested positive for the virus.

Leading epidemiologist Dr Gabriel Scally warned that the easing of Covid-19 restrictions in Northern Ireland will lead to a wide circulation of the virus.

Dr Scally said coronavirus cases were still high and that the Executive’s decision to end the circuit-breaker was setting the scene for a “very bad January and February”.

Non-essential retailers can reopen next Friday following the two-week lockdown.

Dr Scally, of the Royal Society of Medicine, said: “The cases in Northern Ireland is still well above the level it was a couple of months ago and it’s coming down, but it’s not coming down that fast.

“I think with Christmas coming up, people will see this as permission to do lots of things they haven’t been able to do and a lot of those situations, whether it be restaurants, or whether it be a lot of crowds shopping – all of that will just feed the virus and the numbers will go up.

He said the decision to lift restriction was “not wise”, particularly when a vaccine was being deployed.

Businesses such as restaurants, cafes and hotels can also resume trading then but must be closed at 11pm each day.

Pubs that do not serve food will have to remain closed.

Guidance about social distancing within cafes and restaurants is to be set at two metres, the Stormont Executive has decided.

“I think people need to really understand that just because the Northern Ireland Executive says you can do something, it doesn’t mean it is a good idea to do it,” Dr Scally added.

“I think a lot of people, particularly those with underlying conditions, will be very cautious.

“We haven’t come through these last nine months to let this virus run rampant just because Christmas is coming.”

He was also critical of Northern Ireland’s contact tracing system, describing it as a “major failure”.

The epidemiologist said that Government initiatives to spend money in the hospitality sector drove people out of their homes and into restaurants, which he said was “perfect for spreading”.

He was also critical of the travel restrictions in and out of Northern Ireland and the Republic of Ireland.

“That ability of the virus to move with people across borders, in and out of ports and airports, in restaurants and in all sorts of ways set the scene for a really bad autumn,” Dr Scally added.

“My worry is there is more virus around now than there was during the summer and we are setting the scene for a very bad January and February.”

He also warned of multigenerational mixing around Christmas time.

He urged people to “save up their hugs” for Easter when the vaccine had been administered. –Additional reporting agencies