Taxi industry ‘will not cope’ with Christmas rush after driver exodus 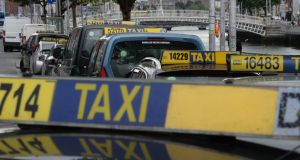 After reports of cab shortages in central Dublin on the first night pubs and restaurants reopened after six weeks of lockdown, an industry representative said availability would only deteriorate in the coming weeks. File photograph: Alan Betson

People dining out in the run up to Christmas face being stranded on the streets because the taxi industry cannot cope with demand after an exodus of thousands of drivers during the pandemic, it has been warned.

After reports of cab shortages in central Dublin on the first night pubs and restaurants reopened after six weeks of lockdown, Vinny Kearns, chief executive of NXT, one of the country’s largest taxi firms, said availability would only deteriorate in the coming weeks.

“The situation is going to get worse, not better, right up to Christmas Eve,” he said.

“They were in dire straits during the lockdowns, with finance companies beating down their doors for missed payments on cars and the like,” he said.

“I know so many people in the industry – and there are about 20 per cent of drivers who have HGV licences as well – that are now driving for supermarkets and wholesalers.

“A lot of drivers who haven’t got that licence are driving for courier companies who are out the door looking for more drivers. The courier companies are actually calling up taxi drivers, knowing that they know their way around, offering them work.”

Mr Kearns said the hike in demand for delivered goods during the restrictions to curb the spread of the coronavirus, coupled with a collapse in demand for taxis with shops, pubs and restaurants shuttered, had forced as much as one-fifth of drivers to take up other work.

“Taxi drivers who for the past eight months could not go out and earn 50 quid for 12 hours during the day, are now driving vans and trucks,” said Mr Kearns, a former vice-president of the National Taxi Drivers Union.

“They are not coming back. They are quite happy and have as much work as they want. They are sitting down to their dinner, finished work at 6pm. Many don’t have to work weekends – for a taxi driver that’s heaven.

In September, hundreds of taxi drivers protested in Dublin city centre, calling for more financial supports from the Government, with drivers saying they were struggling to survive with as little as just 20 per cent of their usual trade.

While drivers can avail of the Covid-19 Pandemic Unemployment Payment, Mr Kearns said access to the supplement was too little and came too late for drivers under pressure to cover large insurance premiums, car repayments, fuel and maintenance costs.

“There is nothing that can be done about this short term, because it’s been left too late,” he warned.

“Taxi drivers have left by now and they won’t be coming back. There will be a grave impact over Christmas.”

Mr Kearns said people trying to hail a taxi after a night out over the festive period “won’t be able to get one from here on in”.

“Getting out shouldn’t be too much bother, but definitely – considering public transport is operating at reduced capacity – the taxi industry will not be able to cope with after pub closing hours on busy nights from now to Christmas,” he added.

“People will have to plan their night. Anyone who thinks they can walk out of a pub and grab a taxi – that is not going to be the case. Definitely not in a city centre.

“People who are waiting on the streets will be left waiting. People who have booked might have delays, but will get home.”

CASE STUDY: ‘I can’t see me ever going back to driving a taxi’

“I was born into the business,” says Dave Murphy, a taxi driver for 35 years, whose father was a secretary of the Irish Taxi Driver Federation.

“I was the youngest taxi driver in Dublin when I started out at the age of 19.”

Now aged 54, Murphy is giving up on the trade as a result of the pandemic to retrain as a driving instructor.

“I had a romantic notion at the start of the outbreak of just taking a guilt free month off work,” he says.

“I stopped the mortgage, the car repayments, the credit union, everything, to take a month out. The weather was good.

“But then one month turned into two months, turned into three. Drivers were only turning 40 or 50 quid a day. When it became four months I knew it was not sustainable.”

The Dundrum-based driver has two children, one in final year at college, the other sitting the Junior Cert next year. He says mounting bills forced him to turn to his teenage apprenticeship training in stone masonry – he carves headstones and makes patios – to get by while studying for his driving instructor exams.

While there will be demand over the coming weeks for taxis, Murphy thinks it wouldn’t pay to renew his taxi insurance policy – he was quoted €1,700 – which expired last month.

“After Christmas there is going to be nothing again,” he says.

“Everybody is already talking about going into another lockdown in the new year.

“I’m more than three decades in the taxi business, I know a lot of drivers. I would imagine one in three are going out of the business.”

Murphy says he felt there was “no help from the Government” for the taxi industry compared with the financial packages given to other industries.

“I wish they had done more for the drivers to be honest,” he adds.

“I’m lucky because I have something I can turn my hand to. There are drivers out there who don’t have anything they can turn their hand to, and it’s those guys I feel most sorry for.”

For now, he is hoping to qualify as a driving instructor by next March.

“I can’t see me ever going back to driving a taxi.”