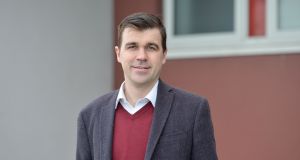 Duncan Smith: “I don’t think at this point we should go into government, and it doesn’t change the mandate we got in February.” Photograph: Alan Betson

Supporters of Labour leadership contender Alan Kelly are split on whether the party should enter government with Fianna Fáil and Fine Gael in the weeks ahead.

Mr Smith said: “We will do everything we can in the context of Covid-19 to tackle this crisis, but I don’t think at this point we should go into government, and it doesn’t change the mandate we got in February.”

Mr Kelly, who earlier in the leadership contest with Aodhán Ó Ríordáin said Labour should go into opposition, did not return calls.

Mr Ó Ríordáin said he would not lead Labour into government with Fianna Fáil and Fine Gael, but that the party would play its part in helping the country through the coronavirus crisis.

The party has six TDs, having lost a seat in February’s general election.

The political focus has shifted to Labour as the conclusion of its leadership contest approaches later this week.

The Green Party, which has 12 Dáil seats, has called for a national unity government. It is understood its TDs will again discuss this week its government talks strategy if its unity government proposal fails.

Some, such as leader Eamon Ryan, are understood to be open to talks with Fianna Fáil and Fine Gael, while others are opposed. Opinion between the two options is said to be roughly evenly divided in the Greens.

They have a golden opportunity to bring about their major policy, but the SocDems are missing in action at a time of national crisis

Between them Fianna Fáil and Fine Gael have 72 seats, eight short of a majority. Taoiseach Leo Varadkar on Monday said he hoped that a “common framework document which would sketch out how a government might work” could be agreed between the two parties by next week.

“Independents…wouldn’t be enough, so we will need a third party. So the idea then if we can agree a common framework document is to reach out to Greens, Social Democrats and Labour,” he said.

Finian McGrath, the outgoing Minister of State for Disability Issues who attends Cabinet, criticised smaller parties, in particular the Social Democrats, for their approach to entering government.

The former Dublin Bay North TD, who did not stand at the general election but will remain a Minister until a new government is formed, said the Sláintercare plan to expand public healthcare favoured by the Social Democrats was being implemented as a result of the coronavirus crisis.

“They have a golden opportunity to bring about their major policy, but the SocDems are missing in action at a time of national crisis.”

A spokeswoman for the Social Democrats said: “We have been very proactive in supporting the Government during this health crisis. We have been talking to everyone across the political spectrum regarding what might or might not be possible, and will continue to offer the support we have been doing all through this crisis.”