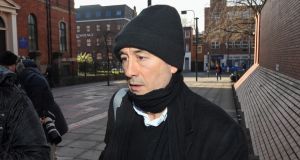 Former RTÉ producer Kieran Creaven, who pleaded guilty to sex offences after he travelled to England to meet what he thought was a 13-year-old girl, has been jailed for 18 months.

On December 18th, 2017, Creaven (55), from Dublin, pleaded guilty to a charge of attempting to meet a girl under the age of 16 years following grooming.

Creaven also pleaded guilty to a second charge of attempting to cause or incite a girl aged between 13 and 15 to engage in non-penetrative sexual activity.

He was sentenced at Leeds Crown Court on Friday afternoon.

The court heard he planned on two occasions to fly over from his home in Dublin to meet the “girl” he had groomed through Facebook messages.

A Facebook account was set up under a fake name of Keeley Nutton by the group Predator Exposure, who cornered Creaven in Leeds on November 18th, 2017 where he was expecting to meet the “girl”.

Creaven, who the court heard was living in a “cyber world of pornography”, had two boxes of condoms, a list of female names and two phones on his person when he was arrested.

The online conversation was described as “prolonged” by the prosecution; it began in July 2017 and ended in November 2017.

The “girl” repeatedly told the defendant she was 13 during hundreds of messages exchanged over the four-month period. He sent her a picture of his erect penis over Facebook messages and the girl told him she had never seen one before.

The defendant also told the girl he wanted to “kiss and cuddle” her. He pleaded guilty at a previous hearing to attempting to meet a child following grooming for a sexual purpose and of attempting to cause or incite a child to engage in sexual activity, namely kissing and cuddling.

Creaven told police he fully accepted messaging the girl but said he did not mean it in a sexual way.

He admitted he had made online contact with 15 to 20 teenage girls, aged between 13 and 18 years of age, blackmailing some of them by threatening to release information about them on Facebook.

Kitty Colley, prosecuting, said: “He said he would talk to children online and at times buy credit for their phones so they could talk to him, but when they blocked him he would do something as revenge, such as put on Facebook that they had sent him naked photos.”

One of the messages sent by Creaven to the fake profile read: “I’m wishing you were here in bed with me, warm and snuggled under the duvet, I will keep you wrapped up in my arms all night.

“Smell your hair, kiss you, wake up together in the morning.”

Miss Colley said: “At the time of the offences, he was working as a TV producer in Ireland. Between July and November of last year, he started contacting with a girl he thought existed and was only 13 years of age.

“The defendant lives in Dublin and that contact started by his contact of a girl’s profile on Facebook. There is no complainant as such in this case.

“The profile was set up by an online paedophile hunting group called Predator Exposure.”

The prosecutor added: “It was very clear from the beginning that she was 13 as she said: ‘I’m only 13.’

“Creaven also had a fake profile – he set himself up as a younger man in his 30s, although, in fairness to him, he described himself as that and told ‘her’ he was in his late 30s.

“He set up a profile, including photographs, of someone called ‘Jimi Cee’. During the many communications they had, he sent her images of himself.

“He started the communication by saying she appeared as a recommended friend and said ‘hi’.

“She responded referring to herself as being at school and her age.

“Hundreds of messages were sent between Creaven and the profile. He would flatter her, he would say ‘night-night’ and refer to her as ‘baby’.

“The conversation quickly turned sexual, with him saying he wished he could ‘smell your hair, kiss you and we’ll be together in the morning’.”

The court heard Creaven sent a message to the ‘girl’ saying: “love your new profile picture, smouldering” along with a wink emoji.

The prosecutor added: “By October 2017, he arranged to travel to a Leeds United match and would take her and she was clearly impressed by this as she had never been to a match before.

“However, the meeting was cancelled as he said he was ill and she said she had to see her grandma.”

Ms Colley said Creaven asked the ‘teenager’ to stay with him in the Queen’s Hotel in Leeds. He said she would need ID and he would pretend to be her father. As he left the hotel, he was confronted by the Predator Exposure group and filmed live on Facebook.

He was arrested and when he was searched, police found two boxes of condoms on him. Ms Colley said: “He told police he had an addiction to pornography and it had been that way for a number of years and technology made him do it.”

He said that he had an addiction to pornography and watched videos of male and female children aged between eight and 17. When asked why he did it, he said: “I need professional help and I am attracted to children.”

Creaven’s solicitor Ian Cook said: “He was living in almost a cyber world of internet pornography”. He said that Creaven’s wife, in a submitted letter, said he had been “in a dark place” for a number of years.

He said that his client was creating personas of himself online and he also went on a dating site.

Mr Cook referred to his client’s early guilty plea and said that his offending was best managed within the community.

Creaven, who had no previous convictions, sat motionless in the dock throughout, dressed in a black jumper and white collar.

Jailing Creaven, Judge Recorder Simon Phillips QC said: “You believed you were dealing with a real person and you believed her to be 13 years of age.

“You went to considerable lengths in an attempt to meet with her.

“You have lost your job and your marriage has been shattered.”

Creaven was jailed for 18 months and was made subject to an indefinite sexual harm prevention order.