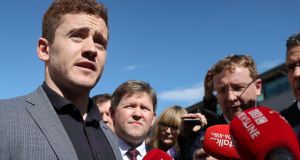 Ireland and Ulster rugby player Paddy Jackson speaking outside Belfast Crown Court after he was found not guilty of raping a woman at a property in south Belfast in June 2016. Photograph: Niall Carson/PA Wire

Paddy Jackson has said he is ashamed the woman who accused him of rape left his home distressed and has apologised for betraying the values of his family.

Jackson (26) and his Ireland and Ulster teammate Stuart Olding (25) were unanimously acquitted in Belfast Crown Court last week of raping the same woman at a party at Jackson’s south Belfast home in June 2016. Jackson was also found not guilty of sexual assault.

He told the Press Association he would always regret the events of the night in question.

“I am ashamed that a young woman who was a visitor to my home left in a distressed state,” he said.

“This was never my intention and I will always regret the events of that evening.”

The flyhalf, capped by Ireland 25 times, apologised unreservedly for engaging in “degrading and offensive” Whatsapp conversations about the incident.

Jackson also said public criticism of his behaviour was “fully justified” and he expressed determination to return to the values and principles that guided his upbringing, in particular the importance of respect.

Jackson and Olding have both expressed a desire to return to rugby action.

They remain relieved of their duties pending the outcome of a review into their conduct by Ulster Rugby and the Irish Rugby Football Union (IRFU).

That exercise is focusing on a series of sexually explicit messages sent by the players and their friends in the wake of the incident.

Jackson said: “I am also truly sorry for engaging in a Whatsapp group chat which was degrading and offensive and I apologise unreservedly for this.

“The criticism of my behaviour is fully justified and I know I have betrayed the values of my family and those of the wider public.

“Following the trial I have taken time to reflect with my family on the values that were such an integral part of my upbringing, the most important of which is respect.

“My departure from these values has caused understandable public anger and I am resolutely committed to returning to those principles.”

In the wake of his acquittal, Olding also expressed regret for his involvement in the incident.

Two other men were unanimously acquitted of lesser charges related to the high profile case.

Blane McIlroy (26) was acquitted of exposure while Rory Harrison (25) was found not guilty of perverting the course of justice and withholding information.