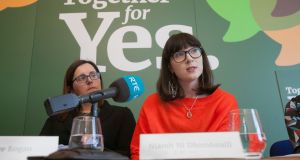 Niamh Ní Dhomhnaill (R) addresses Together for Yes’s launch of its position paper for the abortion referendum campaign, in Dublin. Photograph: Gareth Chaney/Collins

A woman who was the victim of rape has said the Eighth Amendment is another layer of shame that victims of sexual assault have to endure.

Niamh Ní Dhomhnaill was raped while she slept by her then boyfriend Magnus Meyer Hustveit, between 2011 and 2012.

Speaking at Together for Yes’s launch in Dublin on Thursday of its position paper for the abortion referendum campaign, Ms Ní Dhomhnaill said it took her years to accept she had been the victim of rape, and it was something she still struggles with today.

It can often take victims weeks or years to come to terms with what has happened to them and to acknowledge they have been raped, she added.

When she first became aware of what had occurred, her first thought was whether she could have become pregnant as a result of the assaults.

“In those initial moments of horror, my mind immediately went to the next worst possible situation – to be pregnant in Ireland as a result of rape.

“I believe if I lived in a State with more liberal laws and a more open mind to abortion that this would not have been my first thought,” Ms Ní Dhomhnaill added.

Ms Ní Dhomhnaill’s attacker was initially given a seven-year suspended sentence. This was overturned following an appeal and he was imprisoned for 15 months.

While she did not become pregnant as a result of rape, she said there are many other women that do.

Ms Ní Dhomhnaill, who is an assistant psychologist, said women in these vulnerable, time-sensitive situations should not be forced to disclose that they have been sexually assaulted.

The Amendment adds another layer of shame, stigma and isolation to the situation, she added.

“I don’t want this for any other woman or girl. I want them to know that they will be supported to make the best decision for them. The only way that this can be done is by repealing the Eighth Amendment and by adopting an open, supportive attitude that is reflected in our laws and services.”

The Eighth Amendment gives the unborn and the mother an equal right to life.

The referendum on May 25th will ask voters whether they want to repeal the Amendment and allow for unrestricted terminations up to 12 weeks into a pregnancy.