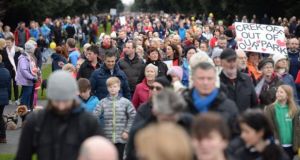 An Bord Pleanála has granted planning permission for a development including more than 100 houses and 400 apartments on a site at St Anne’s Park in north Dublin.

Crekav Trading, part of developer Marlet, has proposed building 104 houses and 432 apartments on land that is used by St Paul’s College, in Raheny as six playing pitches.

The land was formally owned by the Vincentian Fathers, who are the trustees of the all-boys secondary school St Paul’s College. Local sports clubs such as Clontarf GAA and Clontarf Football Club also use the pitches.

On Friday, An Bord Pleanála granted permission for the project, subject to 24 conditions. It said the housing development “would constitute an acceptable residential density in this suburban location,” adding it “would not seriously injure the residential or visual amenities of the area.”

The developer proposed to build two new all-weather pitches for the school, which can be converted into three, to make up for the loss of the existing pitches.

However, on March 27th Dublin City Council (DCC) refused an application from St Paul’s College for the all-weather pitch development, as it would have “significant impacts” on the use of the land as a feeding resource for Brent geese in the area.

Clontarf GAA chairman Donal Nolan said the refusal of the all-weather pitch development now left local clubs “in the lurch”, given the existing pitches were approved for redevelopment.

St Paul’s College “will be lodging an appeal shortly” with An Bord Pleanála, over the city council’s rejection of the all-weather pitch planning application, a spokesman said. “We are committed to delivering first class sports facilities for the students attending St Paul’s College,” he said.

The 535 unit housing development application was made directly to An Bord Pleanála under a fast track process for large housing projects, bypassing Dublin City Council. However, city council chief executive Owen Keegan recommended that An Bord Pleanála refuse the application.

Lorraine Dockery, senior planning inspector for An Bord Pleanála, said the site borders St Anne’s Park on three sides, separated by a steel fence. Ms Dockery was satisfied the proposed development would not “unduly impinge” on the character of the public park, in a planning report completed on March 23rd.

There was a large amount of local opposition to the proposed residential development. Over 1,110 third party submissions were received by An Bord Pleanála, as well as a petition opposing the development backed by 7,000 people.

North Dublin based Labour Senator Aodhán Ó Ríordáin said the approval from An Bord Pleanála was disappointing, and the development would have a “devastating effect on the environmental integrity of St Anne’s Park.”

I Love St Anne’s, a local group set up to oppose the plans, said the decision to approve the development was a “bad day for Dublin”.

Georgina Moore, a Raheny resident, said the development would “have a huge visual impact” on St Anne’s Park. “The tranquillity of the park will be gone” she said.

Pat Crean, Marlet chief executive, said they were “delighted” the housing development had been given the green light. The project will deliver “badly needed homes close to the city”, and would respect the neighbouring St Anne’s Park as a “wonderful amenity,” he said.

The land had once been part of the St Anne’s Estate owned by the Guinness family, but was acquired by Dublin Corporation in the 1940s, before the Vincentian Fathers bought it in three transactions between 1952 and 1959.