Analysis: Eir’s problems will only get bigger until it takes customer care seriously

As many of eir’s customers will know, the company’s appalling record on customer care is not new 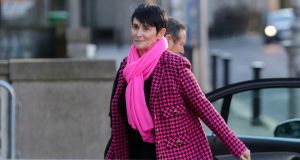 The difficulty Carolan Lennon had – or the difficulty she should have had if the questioning been more pointed – is that all the excuses she trotted out, even if they were legitimate, only cover the last 12 months. Photograph: Gareth Chaney/Collins

Listening to eir’s chief executive Carolan Lennon and the legion of politicians lined up to haul her company over the coals at the Joint Committee on Transport and Communications Networks on Wednesday morning observers would have been forgiven for thinking the problems besetting the company are new.

TDs and senators detailed just how appalling the company’s customer care is and outlined the miserable experiences of constituents and their own personal difficulties trying to get eir to resolve sometimes simple problems.

Its failure to answer phones or return calls or hook people up to high-speed broadband boxes metres from their front doors were highlighted. Even the company’s choice of hold music – something far too many people will be wearily familiar with – came under sustained fire.

For her part Lennon again apologised for her company’s failings and she stressed on several occasions that she was not in the room to make excuses.

But, almost in the same breath, she rolled out a litany of excuses. The pandemic was blamed. The setting up of a call centre in Sligo was blamed – something which did not go down well with committee members who called on her to apologise to the people of Sligo for any offence she may have caused. Working from home was blamed. Staff turnover was blamed.

But what about before then? As many readers of this newspaper and even more of eir’s customers will know – and as Lennon surely knows – the company’s appalling record when it comes to customer care is not new.

In fact it predates Covid-19 by well over a year. As far back as 2018 the company’s spokemen and women were regularly apologising for its failings and promising that things were about to get better.

They did not get better and that begs questions as to why should anyone believe they are going to get better now, as Lennon promised at the hearing.

It was also interesting to see so much focus being put – both by Lennon and her questioners – on the unacceptable wait times between calling the company and connecting with a human being. That is a problem for sure but it is by no means the most serious one customers face daily.

As well as waiting far too long to get through to a call centre representative, many, many readers who have contacted The Irish Times to complain about eir highlight its inability to resolve problems and its failure to join the dots on complaints.

That means every time someone contacts eir with a problem they have to start their story from scratch. Promises are made that issues will be fixed and then they are broken, forcing people into an endless cycle of waiting and hoping.

Lennon did address eir’s attempts to reduce call backs at the hearing but it was a throwaway comment not properly pressed by the politicians.

They did at least establish what may lie at the core of eir’s problems. It emerged at the hearing that eir pays its customer care reps annual salaries of between €21,000 and €23,000 plus bonuses.

Lennon did not elaborate and nor was she asked what the bonus payment structure was, but it seems likely people are rewarded for the volume of calls they process rather the number of problems they actually resolve which is obviously a concern.

Lennon was questioned about wages and accused of “low-balling” when it comes to pay and told that perhaps paying such low rates was at least in part at the root of its poor customer service.

She disputed this with a casual “we will have to agree to disagree”.

That is to deny the reality that when you pay little over minimum wage to the people who you ask to represent your company and then fail to either empower them to make the best decisions or reward them for dealing efficiently and effectively with every complaint that comes their way you can not be surprised if there are problems.

And in the case of eir, those problems are only getting bigger until it starts taking its customer care seriously and paying whatever it takes to ensure those on the frontlines are sufficiently trained and sufficiently skilled to do the jobs asked of them by the company. And more importantly by the customers who ultimately pay the wages of the most junior call centre operative as well as the company’s chief executive.