Details for Shane Lowry’s homecoming event have been announced

Department ‘more than happy to fund anything’, says Ross 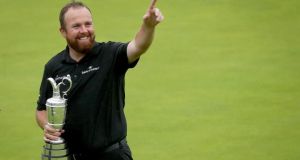 Shane Lowry: ‘I kept telling myself ‘you’re in the driving seat’ and I pulled away. I was calm, I was nervous, scared.’ Photograph: Oisin Keniry/Inpho

The event will feature Des Cahill as MC and a performance from the musician Mundy. The announcement also read; “Let’s give Shane the welcome home he deserves”.

Minister for Sport Shane Ross has said his department is ready and willing to fund anything Lowry wants in the way of a celebration of the Offaly man’s British Open win.

“We’re more than happy to fund anything,” Mr Ross said.

Mr Ross was present at the Open in Portrush on Sunday but did not make it to the 18th hole for the final shot and presentation as he had returned to the club house at Royal Portrush despite queuing for an hour and a half in the rain.

He also said he had taken the opportunity on Sunday while in Portrush to meet with the R&A, organisers of the Open to discuss the possibility of the event being held on the island of Ireland again. “Golf is an all island game, there is no border in golf.”

Lowry’s local club, Esker Hills in Tullamore, was the scene of cheers and celebrations after his victory.

Lowry became just the fifth Irishman to lift the Claret Jug and the only Irish player to win a Major on the island of Ireland after he carded one-over-par 72 on Sunday.

“I’d say there were people watching golf today that never watched before,” Lowry said in an interview on Sunday.

The 32-year-old Clara native told RTÉ radio’s Morning Ireland that the final round in Portrush had been very tough. “With the wind and the rain the course showed its teeth.”

His plan had been to stay ahead all day especially when it became a “two horse race” with Tommy Fleetwood.

“I kept telling myself ‘you’re in the driving seat’ and I pulled away. I was calm, I was nervous, scared.”

He added that the walk down the 18th was “one of the most surreal experiences of my life. I can’t believe it happened to me”.

“Obviously a lot of people helped me along the way, my coach, family, friends and Bo, my caddy. I owe him an awful lot.

“He was a big influence on me. I was very happy that I could share that walk with him. This is his home area.

“He had his newborn son with him which made it even more special and I had all my family with me. “We’re going to have one hell of a few days.”

1 Funeral of John Hume hears peacemaker ‘gave dignity and life to so many people’
2 Fresh investigation into the murder of Michaela McAreavey in Mauritius
3 NPHET calls for ban on non-essential travel from countries with high Covid-19 rates
4 Irish in Canary Islands: Life has changed dramatically
5 ‘This was like a nuclear bomb’: More than 2,700 injured in Beirut explosion
Real news has value SUBSCRIBE