Man struck by car at Dundalk graveyard in serious condition 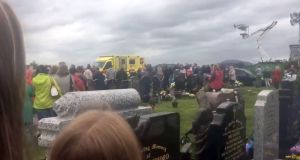 The scene in St Patrick’s cemetery, Dowdallshill in Dundalk, where several people were injured, including one seriously. Photograph: @Simonc46176551/PA Wire.

The elderly man injured after being struck by a car which drove into a crowd in a graveyard in Dundalk, Co Louth, at the weekend remains in a serious condition.

He was transferred overnight on Sunday to Beaumont, Dublin from Our Lady of Lourdes Hospital in Drogheda, and is being treated for a head injury.

The car drove into a large crowd gathered for the annual blessing of the graves ceremony at St Patrick’s cemetery on Sunday shortly before 4pm.

The dark coloured car then drove out of the cemetery and collided with a number of parked cars on the road outside before coming to a stop.

Gardaí believe the car was stolen as it had been parked in the graveyard earlier in the afternoon.

A man in his 20s, believed to be the driver of the car, was arrested at the scene. He was still being questioned on Monday night.

One of those in the cemetery was Independent TD for Co Louth Peter Fitzpatrick who said that at one point he was less than 20 ft from the car.

He was there with family member when he said, “there was a bang and smoke and a car came out from the crowd at very very high speeds, took a sharp turn and headed towards the graveyard.”

“Then all of a sudden we thought it had stopped and about 15-20 seconds later it came down the far side of the graveyard at a very very high speed.”

He said at one point he could clearly see the driver, “he was 15-20 ft from me, he looked like a man possessed.

“It is a miracle that nobody was killed. This man had no respect for anybody and in fairness, it is the closest thing I have ever seen to attempted murder. I hope to never experience anything like that again.

“The speed he was going at you would not see in a Starsky and Hutch film,” he added.

Fr Mark O’Hagan who was officiating at the service anointed the injured man at the scene and said that for those there, it was frightening and, “I could see fear in their eyes and faces and total disbelief.”