Having Covid-19 can give immunity for five months but people can still spread it, study finds 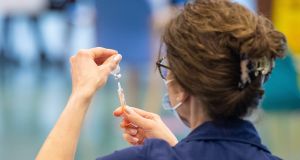 A nurse prepares a dose of the Oxford/AstraZeneca Covid-19 vaccine at the NHS vaccine mass vaccination centre that has been set up in the grounds of Epsom Race Course, in Surrey, Britain Photograph: Dominic Lipinski/EPA.

Previous Covid-19 infection provides some immunity for at least five months, but people may still carry and transmit the virus, according to a new study among British healthcare workers.

Experts have warned that a small number of those with immunity may still be able carry the virus in their nose and throat and therefore have a risk of transmitting it to others.

The first report from Public Health England’s (PHE) Siren study found that antibodies from past infection provide 83 per cent protection against reinfection for at least five months.

This suggests that people who contracted the disease in the first wave may now be vulnerable to catching it again.

Although reinfections in people with antibodies were rare, the researchers identified 44 potential reinfections among 6,614 participants who showed evidence of previous infection.

Professor Susan Hopkins, senior medical adviser at PHE and the Siren study lead, said: “This study has given us the clearest picture to date of the nature of antibody protection against Covid-19 but it is critical people do not misunderstand these early findings.

“We now know that most of those who have had the virus, and developed antibodies, are protected from reinfection, but this is not total and we do not yet know how long protection lasts.

“Crucially, we believe people may still be able to pass the virus on.

“This means, even if you believe you already had the disease and are protected, you can be reassured it is highly unlikely you will develop severe infections, but there is still a risk that you could acquire an infection and transmit to others.

“Now, more than ever, it is vital we all stay at home to protect our health service and save lives.”

Since June, PHE has been regularly testing tens of thousands of healthcare workers across the UK for new Covid-19 infections as well as the presence of antibodies, which suggest people have been infected before.

The study leaders are clear that this first report provides no evidence towards the antibody or other immune responses from coronavirus vaccines, nor should any conclusions to be drawn on their effectiveness.

The study, which has not been peer-reviewed, will consider vaccine responses later this year.

Scientists concluded that naturally-acquired immunity as a result of past infections provides 83 per cent protection against reinfection, compared with people who have not had the disease before.

They added that this appears to last at least for five months from first becoming sick.

While the research will continue to assess whether protection may last for longer, this means people who contracted the disease in the first wave may be able to get it again.

PHE said early evidence from the next stage of the study suggests that some of these individuals carry high levels of the virus and could continue to transmit it to others.

Between June 18 and November 24, scientists detected 44 potential reinfections - two probable, and 42 possible — out of 6,614 participants who had tested positive for antibodies, representing an 83 per cent rate of protection from reinfection.

She added: “It is good that it’s protecting people, but it’s not 100 per cent protective, and therefore people still need to follow the rules, until we know more about this, on the durability of the response, and also understand better why some of these individuals have not responded, or is this particular to a certain group.”

Prof Hopkins explained that when the study was designed, researchers were looking to ensure they could capture the minimum immunity that would be acceptable for a vaccine.

She continued: “And at that time, the vaccine effectiveness studies were setting out to look at ‘did vaccines have 50 per cent to 60 per cent efficacy in reducing future symptomatic infection?’

“And if you look at this from a symptomatic point of view, we’re seeing a very small proportion — 13 out of the 44 — have had symptomatic infection.”

Prof Hopkins added: “What’s that saying to us is that prior infection looks as good as vaccine, at least at this time interval, which is very good news for the population, and it will help alongside vaccine to give a level of immunity in the population that will start to reduce transmission.

“What we don’t yet know and what this study is setting out to do is to determine the durability of that response.

“Overall I think this is good news, it allows people to feel that their prior infection will protect them from future infections, but at the same time, it is not complete protection, and therefore they still need to be careful when they’re out and about.”

“I am strongly encouraged that people have immunity that is lasting much more than the few months that was speculated before the summer,” Prof Hopkins said. - PA