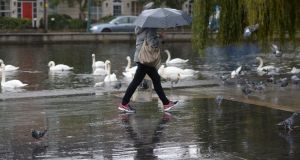 There will be scattered showers of rain among dry spells this weekend, according to Met Éireann. Photograph: Alan Betson/ File

Dry spells and some scattered showers are forecast for this weekend with highest temperatures between 6 and 9 degrees.

Thursday will be mainly dry with sunny spells and a few scattered showers in the north and west. Highest afternoon temperatures will be between 7 and 9 degrees with light to moderate northwest breezes.

Thursday night will be cold and dry with clear spells and dense fog will develop in many areas. Frost and icy patches will develop also with lowest temperatures of -2 to 2 degrees.

Friday morning will be cold and dry with frost and fog gradually clearing. Some sunny spells will develop but cloud will increase throughout the day. Rain will develop in the west in the late afternoon and spread eastwards through the evening.

Highest daytime temperatures will be between 4 and 8 degrees with freshening southerly winds.

Friday night will be wet and breezy with rain spreading eastwards across the country and becoming widespread.

The rain will clear from most places by morning with clear spells and showers following from the west. Lowest temperatures will be between 6 and 9 degrees with fresh, gusty southerly winds veering westerly as rain clears.

On Saturday morning, any lingering rain in the east will clear to give a cool day with a fair amount of cloud and some showers at first, but brightening up later.

Sunday will be mainly dry with some bright or sunny spells at first, but tending to become cloudier during the day with some patchy rain or drizzle developing in the west and northwest. Highest temperatures will be between 5 and 8 degrees with light to moderate southwest breezes. There will be a fair amount of cloud and some patchy mist and drizzle on Sunday night with lowest temperatures between 3 and 6 degrees.

Monday will start off dry but rain will develop in the southwest and spread northeastward over the country.