Almost 900,000 people tuned in for the presidential debate

President Michael D. Higgins, speaking during a presidential debate on RTÉ, has defended his use of the government jet to travel to Belfast to deliver a speech. Video: RTÉ 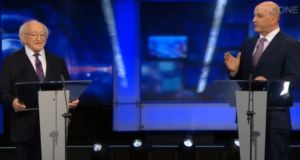 The programme attracted an average audience of 446,000 viewers for the two hour programme on RTÉ One. Photograph: RTÉ Player

Some 885,000 viewers tuned in at some point during Tuesday night’s Prime Time presidential debate on RTÉ One.

The figures indicate the show was the most watched presidential debate in this year’s contest.

The programme attracted an average audience of 446,000 viewers for the two-hour programme on RTÉ One.

RTÉ said additional viewers would have watched on RTÉ One + 1, RTÉ News Now and the RTÉ Player.

The figures compare to the 740,000 who tuned in at some point during the Claire Byrne Live presidential debate, on RTÉ on Monday, October 15th. Some 387,000 viewers on average watched the hour-long programme.

The Claire Byrne Live debate was noted for the absence of candidates Michael D Higgins and Sean Gallagher but the figures held up well. One in three people who were watching television in Ireland at the time watched the programme, RTÉ said.

The Virgin Media viewing figures for its presidential debate moderated by Pat Kenny on October 17th show that a total of 738,000 tuned in to the programme. The 90-minute debate delivered an overall average audience of 434,000. The Virgin Media debate was the first televised debate to feature all six of the presidential candidates — President Michael D. Higgins, Senator Joan Freeman, Liadh Ní Riada MEP, and businessmen Gavin Duffy, Sean Gallagher and Peter Casey.

Comparisons with 2011 are not so easily accessible and not all sources give the same figures. Some media have put the figure for the television debate in “excess of 650,000” while an academic sources suggested the figure may be closer to 800,000.

RTÉ cautioned that some figures for 2011 do not compare like with like and the station said comparable 2011 figures may be available later on Wednesday.

There was no contest in 2004 when Mrs McAleese was re-elected unapposed.