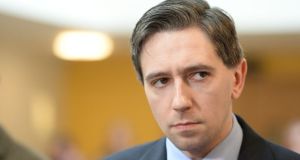 Simon Harris said Storm Emma which led to widespread snowfall across the country earlier this year, cost the health service about €40 million

A campaign by health insurers to dissuade their subscribers from using their insurance when admitted to hospitals though emergency departments has led to a loss of €100 million in projected income, the Department of Health has said.

Department of Health assistant secretary Colm Desmond told the Oireachtas health committee on Wednesday that while it was still too early to forecast the health service’s final financial position for the year, “significant deficits” were emerging.

He said these were being driven by a number of different issues.

The committee is meeting to discuss a €700 million overrun in spending by the HSE in 2018.

Mr Desmond suggested the third part of a planned value improvement programme, which was intended to realise about €150 million would not generate the planned savings.

He said dealing with the overrun as well as demographic pressures and pay increases meant there was not sufficient additional funding left to get serious about the Slaintecare reform plan.

“Slaintecare is not going to happen next year,” Mr Donnelly said.

The health service received €55 million less in funding from the UK government than had been originally anticipated when the HSE budget was drawn up last year, the Minister for Health Simon Harris has said.

The health service in Ireland receives significant funding annually from the UK under an agreement that allows health authorities here to receive payment for the cost of providing treatment to people covered by the UK health system but who are staying or residing in Ireland.

Mr Harris also told the Dáil on Tuesday the HSE now expected that about €80 million would be generated in savings under a value improvement programme which was intended to realise nearly €350 million.

The Minister also said Storm Emma in March, which led to widespread snowfall across the country, cost the health service about €40 million.

Mr Harris was replying to questions posed by Fianna Fáil health spokesman Stephen Donnelly about the estimated €700 million overrun in health spending this year. Mr Donnelly asked whether the HSE had advised the Minister in late 2017 or early 2018 that it was facing a significant overrun and what steps he had taken to address this situation.

Mr Harris said a number of areas within the HSE were contributing to the overspend in 2018. He said these included higher payouts under the State Claims Agency, a shortfall in private patient income, a higher level of spend in the acute and disability services sectors and the additional costs associated with Storm Emma.

He said the overspend in services was driven by the non-achievement of planned savings, higher levels and higher complexity of demand, costs associated with meeting national regulatory standards in the disability sector and the need for additional emergency placements for children and young people with disabilities.

“Finally and importantly, an amount of €280 million was provided in the 2018 revised estimates for appropriations-in-aid receipts from the UK in respect of healthcare provided under EU regulations.

These receipts are now estimated at €225 million, leaving a shortfall of €55 million against the provision.”

The health service agreement with the UK sees Ireland receive payment mainly for treating pensioners, temporary visitors or dependent families of workers who are covered by the UK system but are staying or residing in Ireland.

Mr Harris said in presenting its 2018 national service plan in late 2017, the HSE had “conveyed its view of what it saw as the significant financial challenge of implementing the plan within the allocated budget for 2018”.

“This was not a secret; it was published on pages two and three of the national service plan. In response, I confirmed to the HSE that the plan was to be framed having regard to the funding available. The health sector was but one of several priority areas competing for additional funding in 2018 from the fiscal space available to the Government.

“The Minister said that given the significant allocations provided to the HSE in 2018 and in previous years, it was clear that “issues of budgetary performance needs to be addressed in certain areas and that the HSE should discharge its accountability in this regard under the performance and accountability framework”.

Meanwhile the HSE is set to tell the Oireachtas health committee on Wednesday that by the end of August it had spent €485 million or 5.1 per cent more than its official budget for the first eight months of the year.

In an opening statement to the committee, HSE chief financial officer Stephen Mulvany said 43 per cent or €206 million of this €485 million overrun related to “unfunded cost growths, in 2018, that are outside of the areas of spend which are amenable to normal management control efforts or relate to exceptional costs such as those associated with Storm Emma”.

Mr Mulvany said that 37 per cent or €180 million of the €485 million overrun recorded to the end of August related to “a target shortfall in the savings necessary to offset the unfunded costs of services that were running throughout 2017”. However he said €37 million in savings under the value improvement programme were reported by community health care organisations and hospital groups at the end of August.

“This figure is indicated to be circa €60million in savings by year end. In addition to this there are significant centrally generated drugs and medicine related savings being delivered by the primary care reimbursement service, for example €27million on a clinical protocol driven access initiative and acute hospitals €12million on the framework agreement with suppliers.

“ Finally, 20 per cent or €99 million of this €485 million overrun relates to other unfunded cost growths, in 2018, within our operational service areas.”

In a response to the Department of Health comments on private health insurers, Insurance Ireland, a representative body for companies in the market , said research carried out in January 2017 showed a significant lack of understanding among people with health insurance of the purpose and consequences of the form they were being asked to sign once admitted to public hospitals through emergency departments.