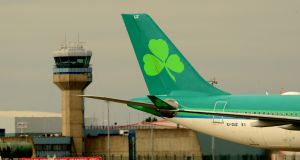 Aer Lingus received a warning from the national advertising watchdog after a customer complained that information on the cost of travelling with pets was misleading. Photograph: Cyril Byrne/The Irish Times

Aer Lingus has received a warning from the national advertising watchdog after a customer complained that information around the cost of travelling with pets on the airline was misleading.

The woman, who had booked tickets for a European flight and intended to bring her animal with her, said Aerlingus. com indicated that pet travel on regional flights cost €40, while transatlantic flights would be €160. She noted that this left a range of costs for travel within Europe.

However, when she contacted freight forwarders, which is a requirement for pet travel in Europe, she was quoted a price of around €1,000 per flight.

The same woman noted the Aer Lingus advertisement linked to a cargo company that only carried pets from London while the four freight forwarders she contacted said the airline would not carry pets on weekends and did not fly pets to the woman’s intended destination.

It was one of 11 out of 13 advertisements found to have been in breach of the Advertising Standards Authority for Ireland (ASAI) code in the latest complaints bulletin through email, social media, television and print advertising.

One customer contacted the watchdog complaining that an email offering 50 per cent off products also contained advertising for non-discounted items. Another complaint was upheld after a leaflet offering cut prices featured a bottle of wine which did not have a discount.

The 123.ie car insurance company is also included in the ASAI’s latest complaints bulletin for running an advertisement which “did not promote safe driving practices”.

Six complaints were received after the ad aired on TV showing a mother using her son’s phone as he drives down the road. Viewers felt the advertisement condoned potentially dangerous driving through the mother’s “persistent and deliberate distraction of the driver in a humorous matter”, said the ASAI who upheld the complaints.

The Body Shape Performance gym was subject to complaints after offering a “1-week FREE gym trial” prize without “any 1-to-1 time with our coaches” on social media, despite advertising its centre as “strictly a personal training gym”.

The complainant underlined that e-cigarettes were not licensed by the Health Products Regulatory Authority as a means of quitting smoking and that smoking cessation was “a medicinal claim”.

Mobile network operator Lycamobile was criticised after an existing customer signed up to a Black Friday two-months-free offer but was later informed the email deal was only for new customers. The committee concluded that most consumers would expect to qualify for a promotional offer when it was sent directly to their inbox.

Complaints of misleading advertising at Curry’s PC World, Joyce’s Supermarket in Galway and Mick’s Garage in Dublin were also upheld by the committee while Largo foods was criticised for social media posts which “encouraged excess consumption” of Tayto crisps.

A complaint against Cadbury which stated the company was encouraging children to consume an unhealthy amount of chocolate through an Easter egg hunt was not upheld nor was a complaint that Applegreen was misleading customers by advertising “low fuel prices, always”.