Campaigners plan national housing march prior to May elections 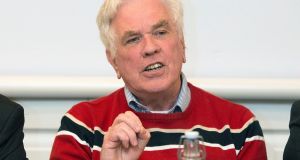 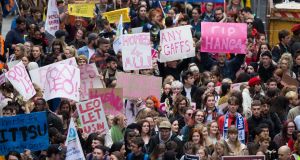 At last year’s Raise the Roof protest in Dublin. Photograph: Tom Honan for The Irish Times.

Housing campaigners are hoping to bring thousands of people onto the streets for a national demonstration next month, to protest at the deepening housing crisis.

The campaign plans to hold another demonstration on Saturday, May 18th, ahead of the local and European elections.

Announcing plans for the march, Fr Peter McVerry said the housing crisis facing the country was on course to become a “catastrophe”.

The Government’s plan of “tweaking” housing policies and regulations was failing, the homelessness campaigner said.

“I would guesstimate very conservatively that there are at least half a million people in this country whose housing situation is causing them serious distress,” he said.

This included the homeless, people in substandard rental accommodation, those in mortgage arrears, and people living in good quality rental homes who feared losing their accommodation over rising rents.

If a large portion of families in mortgage arrears were evicted, the country would increasingly see “middle-class families” falling into homelessness, Fr McVerry said.

The march will take place a week before the local and European elections, to make housing a key talking point in the campaign, organisers said.

Laura Harmon, National Women’s Council of Ireland officer, said many women were living in an “invisible form” of homelessness, staying with friends or family.

These women and their children were not counted in official homelessness figures, which surpassed 10,000 people for the first time last month.

Michelle Byrne, head of campaigns at the Union of Students in Ireland (USI), said students were facing into another college year of housing uncertainty, questioning if they would be able to find and afford accommodation.

“Students are still sleeping on hostels, on couches . . . Students have been suffering at the hands of rogue landlords and the crushingly expensive housing market since the market began to rise,” she said.

People Before Profit TD Richard Boyd Barrett said the upcoming elections should be treated as a “referendum” on the housing crisis.