Feargal Quinn: Retailer who punched above his weight

With Superquinn, he bridged the gap between counter service and supermarket 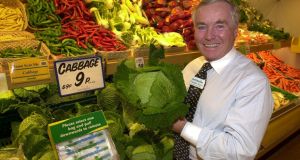 Feargal Quinn was a once-off. I first met him when I was a young marketing student at the College of Commerce in Rathmines. I was part of the students society and had been tasked with getting four people to come and address the students.

The first person I approached was Feargal through Anne O’Brien, his personal assistant. He immediately said yes, that he was always happy to support students and to talk about business. He took an evening from his life to do that, and I never forgot it. It also had an impact on me as I chose my career path.

As I made my way in the grocery sector, we became fierce competitors in the late 1970s and early 1980s – the three of us, Quinnsworth, Superquinn and Dunnes. He was nimble in his own business and generous with competitors. I don’t recall ever seeing him angry. Sometimes you’d see his brain whirring away on some industry problem or another, but he was always a gentleman, and he seemed to be able to operate at that higher level.

He didn’t mind sharing his ideas and thoughts in a way that people would not share with competitors today. He gave more than he took, in that sense. Which is not to say he was anything other than teak tough – retailing is a very difficult and competitive sector. He was a world-class retailer to stand out as he did. He was a great innovator and had the common touch. He could also bend you to his will with a combination of plamasing and gregariousness.

He was a devout Christian, but it wasn’t something he wore on his sleeve. First and foremost he was a family man – everything revolved around his family. But he was also the sort of family man who would go on a busman’s holiday, bringing his kids around supermarkets as part of the holiday. Some of his children were involved in the business over time, but he let them do their own thing first before coming back to the company. In that way he interwove his family with the business.

What he did in business can’t be overestimated. He was a great innovator, bringing in creches, kids’ trollies with signs that said “I’m shopping for Mum,” no sweets at the checkouts, things like that. He bridged the gap between counter service like you’d expect in a local butcher or baker and the supermarket experience, which was modern, involved self-service, but retained friendliness and personality. There was always a butcher to talk to you about the best joint of meat for Sunday.

As Dublin grew he expanded beyond his initial stores, and the developers of suburbs were always very interested in getting a Superquinn to open near where they were building. The brand was known for quality and service, and that drove a lot of business to him.

I remember him inviting American retailers to his home over the years, from the likes of Kroger and Publix. He loved to entertain – I’m smiling as I think of the astuteness of doing that. He was connected across the whole world, and punched above his weight in global retail.

Coca-Cola had a worldwide research council made up of very heavy hitters – he was on that for a very long time, and I’m sure people wondered how could he have been involved for so long when he was a small player in world terms. But that was the esteem in which he was held – he had the ability to transcend or cross over business relationships which lasted many decades.

We were both involved in the Food Marketing Institute, which is a massive US trade organisation, and he would often have been invited to speak at its conferences. I remember being very proud to see him speaking at those conferences. I was proud that he was representing Ireland and the industry and putting us on the map.

I remember once in the late 1980s, we were both travelling from Dublin to Vancouver via London, to one of these conferences. We had a huge chat all the way there about family, philosophy and retailing and where the world was headed. When we got off the plane, I saw this guy standing at arrivals with a sign saying “Senator Quinn” on it. As I was turning right outside the terminal for the taxi stand, I saw him getting into the back of a rather large limo, and gave myself a wry smile and thought: “That’s Feargal, and that’s exactly where he should be.”