Hundreds gather in ‘anger’ at vigil for Lyra McKee

‘We also gather in celebration of a daughter, sister, lover, journalist, and remarkable human being’ 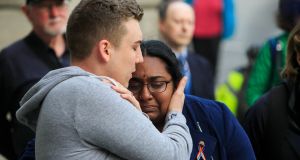 Jordan White and Hamsavani Rajeswaren both from Belfast during an NUJ vigil for Lyra McKee at the Garden of Remembrance, Parnell Square, Dublin.Photo: Gareth Chaney/Collins 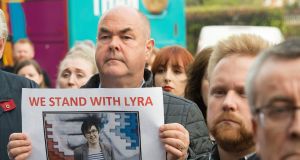 23/04/2019 .The National Union of Journalists (NUJ) held a vigil for murdered journalist Lyra McKee in Dublin. Journalists and members of the NUJ attended the event.Photograph: Dave Meehan

A vigil in Dublin city centre was held in “anger” at the murder of Lyra McKee and in “celebration” of a feminist, activist and journalist.

Ms McKee was shot during a riot in the Creggan area of Derry last week and a group calling itself the New IRA has claimed responsibility for her death.

Hundreds of people gathered for the vigil at the Garden of Remembrance on Parnell Square, which was organised by the National Union of Journalists (NUJ), before proceeding to the Dublin City Gallery.

“But tonight we also gather in celebration, in celebration of a feminist, an activist, a daughter, a sister, a lover, a journalist, a remarkable human being, a kind, compassionate, funny and caring person who brought light and laughter wherever she went, even as often she was angry, frustrated and mad as hell at those who refused to move at the pace which she would have them move.

“A person who refused to accept that things had to be the way they were.”

Mr Dooley said a Go Fund Me page set up to cover the costs of Ms McKee’s funeral has reached € 60,000. He said a bursary will also be established “in honour of an outstanding journalist”.

Dr Grainne Healy, Co-Director of the Yes Equality Campaign read out Ms McKee’s ‘A letter to my 14-year-old self’, about her experience of growing up gay in Belfast.

“Life is so hard right now. Every day, you wake up wondering who else will find out your secret and hate you. It won’t always be like this. It’s going to get better,” she said.

Gloria, Dublin’s Gay and Lesbian choir sang ‘Somewhere Over the Rainbow’ while singer Noel O’Grady sung a rendition of ‘The Island’.

Eleanor O’Mahony, editor of Trinity College’s student newspaper The University Times, read out ‘The Ceasefire Babies’, an article by McKee that appeared in The Independent in 2016.

The vigil concluded with a minute of applause for McKee. Her funeral service will take place in St Anne’s Cathedral, Belfast on Wednesday.

Earlier in Limerick, journalists held a lunchtime vigil in her memory. “We want Lyra to be remembered for the committed journalist that she was; she was non sectarian, she was anti-sectarian, she stood for justice, and she was committed to truth. And, as President Michael D Higgins has said, an attack on a journalist is an attack on truth,” Norma Prendiville, of the NUJ southwest branch.

“Over 160 journalists around the world were murdered last year in the course of their duty. In many ways we thought those days in Northern Ireland were finished, so it was a real, deep, seismic shock to all of us when we heard about Lyra’s killing,” she said.

“In the north, we thought the days of journalists being under attack were over – that’s sadly and tragically is not the case, but we would hope this will change,” said Mary Dundon, head of journalism at University of Limerick said.

Seven more people die in Northern Ireland from coronavirus 18:14
Boy (5) who died in farm accident in Co Roscommon is named 18:05
Surge in unemployment payments to more than 700,000 18:03
Coronavirus: 16 more people have died in Republic bringing total deaths to 174 17:50
‘It’s a leap into the unknown, a real baptism of fire’ - medical students graduate early 17:30