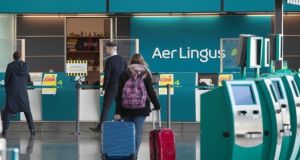 Aer Lingus said it had conducted a review of the route. Photograph: Colin Keegan/Collins Dublin

Aer Lingus has agreed to put extra flights on its Belfast–London Heathrow service after images emerged of an almost full flight with no apparent evidence of social-distancing measures.

The airline said on Tuesday evening that it had conducted a review of its operation of the route, which identified several ways to reduce pressure on the route.

These will include checking in increased numbers of bags, changes to the boarding procedure, and the cancellation of in-flight services.

In a statement, the airline said: “The Belfast–London Heathrow service is provided to maintain a vital air link between Belfast and London and to allow critical workers to travel where required.”

“The safety and security of Aer Lingus’ customers and crew is our number-one priority, and these process changes are being implemented as a matter of urgency.”

Meanwhile, the North’s health minister Robin Swann has spoken of his shock at the pictures which emerged on Monday of the almost full Aer Lingus flight from Belfast to London.

“I was shocked at the images of Aer Lingus,” Mr Swann said. “It was as if they were living in a time before Covid-19, completely oblivious of the regulations and social distancing and guidance that have been enunciated and published by our executive here and the government in Westminster.

“How they could think that the practice that they were actually carrying out was in any way in keeping with the guidance that we’ve been issuing?

“I think it’s a short, sharp shock to them that they should actually be behaving still in that manner and I would ask them publicly to actually revise that very quickly.”