Coronavirus: Irish death toll rises to 1,339 as public urged to ‘preserve progress’ made

Chief Medical Officer Tony Holohan has said that he is unable to provide clarification on whether large gatherings, such as weddings, will be able to go ahead during the continued Covid-19 restrictions. Video: RTÉ 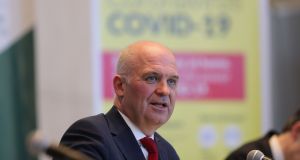 A further 23 people have died of Covid-19 in Ireland and 211 new cases have been confirmed, the National Public Health Emergency Team (NPHET) has said.

The number of new cases confirmed was the lowest reported in more than a month and they bring the State total to 21,983 since the coronavirus pandemic began. A total of 1,339 people have so far died after contracting the disease.

Some of the restrictions introduced in response to the pandemic being eased from today, Department of Health chief medical officer Dr Tony Holohan said “it is crucial that we preserve the progress our country has made in recent weeks”.

“This is a highly infectious disease. It thrives in crowds. It has the potential to rapidly spread to levels that our health service will find difficult to respond to,” he said.

“While we plan how to safely emerge from recent restrictions, none of us should forget that the virus is still in our community. Those who get infected have the same risk of serious illness as they did at the beginning of this pandemic.”

“The positivity rate reducing is a good sign,” said Dr Cillian De Gascun, chair of the NPHET Expert Advisory Group. “Combined with the high level of testing we are now undertaking, this gives us confidence that we are on a path towards suppression of the disease.”

Laboratory capacity for testing Covid-19 samples now stands at 84,000 a week, Dr de Gascun added. He said the majority of tests being performed in the community were being turned around in two to four days and there had been a “significant improvement” in performance in the last two weeks.

A breakdown of the deaths that have occurred shows 46 per cent were in hospitals, including 5 per cent in intensive care units (ICU). Almost 86 per cent of those who have died had an underlying condition.

Men accounted for 51 per cent of deaths and women for 49 per cent. The median age of death was 84 years and the mean was 82.

The number of confirmed Covid-19 cases associated with healthcare workers now stands at 6,293.

In all, 370 people have been admitted to ICU, with 90 still being treated there. There were fewer than five new admissions to intensive care on Tuesday.

Earlier, Minister for Social Protection Regina Doherty warned that the current level of payments being made to people who have lost all or part of their income due to the coronavirus restrictions would be unsustainable in the long-term.

There now 598,000 people receiving the special Covid-19 unemployment payment - an increase of about 7,000 in the last week. The department said this was on top of about 205,000 on the live register in receipt of job seeker benefit.

In addition, workers in 52,000 companies or businesses are having their pay funded in full or in part under the Government’s temporary Covid-19 wage subsidy scheme. It is understood that about 427,000 workers who have received at least one subsidised payment. This means there are about 1.23 million workers relying on State support for all or part of their income.

Ms Doherty told RTÉ radio’s Morning Ireland that she hoped all construction workers would come off the Covid-19 Pandemic Unemployment Payment and return to work in the coming weeks, which see some 78,000 people taken off the live register.

“We will continue to look after people long after this pandemic is over,” she said.

“We are determined that this short term health crisis will not be a long-term economic one for all those workers and families who have been affected.”

She said the Government’s €6.5billion package to support business was a recognition of the need for assistance, she said. Only part of the package will require legislation which would take weeks which was why government formation negotiations were important.

The latest figures on the State finances, published on Tuesday, forecast that the coronavirus crisis will see the tax take decrease by some ¤14 billion this year.

The loss in revenue will be most keenly felt through the income tax and Vat channels because there are fewer people working and less money being spent on goods and services.

People over the age of 70, who are coming out of cocooning, have been advised not to stop and talk with friends or neighbours when they are exercising under the new 5km rule which came into force today.

At the Government’s Covid-19 briefing, the Department of Taosieach assistant secretary general Liz Canavan said the key message to over 70s was “to avoid all contact with other people, maintain a no touch policy and wash your hands on returning home”.

“It is still recommended that people cocooning avoid the shops,” she said.

Ms Canavan said the roadmap to reopening Ireland, which was published last Friday, was a “flexible framework based on an assessment of risk”.

She said it is a gradual and step-based plan towards reopening the Irish economy and society following the lockdown but will be “entirely dependent on our success in slowing down the virus”.

Tánaiste Simon Coveney earlier denied that there is tension between the Government and the National Public Health Emergency Team (Nphet).

Responding to media reports on issues between the two, Mr Coveney told RTÉ radio’s Today with Séan O’Rourke “it’s just not true, it doesn’t mean that we don’t debate the issues. Nphet has a job to do and that is to offer the best advice”.

The NPHET met on Tuesday morning to discuss the situation with coronavirus.

New figures from An Garda Síochána show that the number of people arrested by gardaí, or who had criminal proceedings begun against them, for breaching the 2km Covid-19 restriction increased significantly last week.