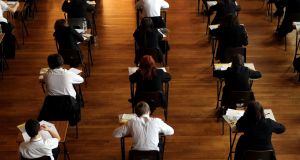 More than 2,000 students in Ireland who are seeking college places in the UK and Europe do not know if they will be able to take up their places this year due to the decision to delay the Leaving Cert. Photograph: David Davies/PA Wire

More than 2,000 students in Ireland who are seeking college places in the UK and Europe do not know if they will be able to take up their places this year due to the decision to delay the Leaving Cert.

Many students have reported receiving correspondence from UK universities stating that they require their Leaving Cert results by August 31st.

However, these results are unlikely to be available until late September or early October in light of the Government’s decision to postpone the exams until July 29th at the earliest.

Ucas , the UK’s equivalent of the CAO system, has confirmed that about 1,700 students with addresses in the Republic have conditional offers based on their exam results.

Most are seeking places in universities in Scotland, followed Northern Ireland and England/Wales.

In addition, it is estimated that a further 600 to 650 students in Ireland have applied for college places elsewhere in Europe.

The bulk of these students are seeking places on courses in the Netherlands, followed by Poland, Hungary and other EU member states.

The Department of Education said Minister for Education Joe McHugh is “very conscious” of the thousands of students taking the Leaving Cert who have applied to study in Northern Ireland, Britain, Europe and elsewhere.

“Before the Minister made the announcement on State examinations on 10 April he called the UK secretary of state for education Gavin Williamson to alert him to the change and to ask for as much flexibility as possible from Ucas on these issues,” according to the department

“He also wrote to the Ministers in Northern Ireland on this issue. Departmental officials are engaging directly with Ucas to work through the key issues.”

It said Mr McHugh has also written to each of his counterparts across the EU to ask for as much flexibility as possible for students coming from Ireland to study in other member states.

“The department will continue to work on these issues with stakeholders over the coming weeks,” it added.

The Irish Second Level Students’ Union said it is raising the plight of these students in its regular contacts with the department through its seat on an advisory group for the State exams, which set up recently.

Some education observers say the fact that the international student market has dried up this year means that institutions are likely to be more flexible in seeking to meet the needs of students.

However, there is no formal confirmation yet on whether UK or European institutions will be in a position to accept Irish students.

Sinn Féin, meanwhile, has called on the Government to spell out what alternative it has in mind in the event that exams are cancelled.

“It is clear that the Leaving Cert cannot proceed unless it is safe for students. Similarly proceeding to plan for exams in July and August is pointless; if this is based only on a slim possibility of exams being held,”said the party’s education spokesman Donnchadh Ó Laoghaire TD.

If it is more likely than not that exams cannot be held, he said we need a “plan B” and to plan definitively for that contingency.

“If the Government are going to cancel exams, they cannot announce this without telling students how the Leaving Cert is going to be awarded and how college admissions will be managed. This would – if anything – create more confusion, uncertainty and add to the stress that students are experiencing.