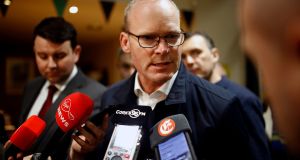 The Government has been strongly criticised by the Northern Executive for a second time since the Covid-19 pandemic began for not sharing information with about major announcements.

Sinn Féin Deputy First Minister Michelle O’Neill said it was very unhelpful that the Taoiseach chose not to share information with her or First Minister Arlene Foster on Friday before announcing the Government’s roadmap on easing restrictions.

“This disease is moving right across this island in the same way and we need to tackle it on an all island basis, in the most joined up and consistent manner that we possibly can.

“So I think it’s unfortunate that they didn’t choose to share that information with either me or Arlene,” she said.

Tánaiste Simon Coveney defended the Government’s approach to the issues. He said that a long meeting had been held with Northern Ministers by videoconference the previous evening and they had been given a “heads-up” that an announcement on a time frame would be made on the Friday.

“There was a clear understanding of the timelines and the approach that was going to be taken. What was not shared on that video conference was the detail, because the detail was not there,” Mr Coveney told RTÉ.

“It was only approved at the meeting of Cabinet the following day [Friday] which took place at 3pm. I don’t think anybody is suggesting that we should be sharing the detail for this plan before the Cabinet actually has a chance to approve it.”

Government sources said that the live announcement of the Taoiseach on RTÉ was made very shortly after the Cabinet meeting came to an end and there had been no time to inform others.

Minister for Social Protection Regina Doherty also defended the sequencing. She said the first responsibility of the Government was to “tell the Irish people and that is what the Taoiseach did at the first opportunity when the Cabinet meeting was over”.

She did add that “in hindsight” perhaps the Northern Executive could have been informed of the impending announcement.

“At the end of the day the most important thing we needed to do was to [tell] the people we serve, the Irish people, and that is what we did on Friday evening.”

Asked at the Northern Executive’s daily coronavirus media briefing on Monday if she had been given an advance detailed briefing, the First Minister, Ms Foster, said it was “for a government to put in place their own staging posts” and they did not have a “comprehensive view as to what was coming in relation to the plan on Friday evening.”

The North’s health minister Robin Swann also said he would have “liked to have seen more of a conversation” with the Irish Government before the announcement on Friday.

“Good manners is to talk to your neighbours and to make sure you know what you’re going to do, whether it’s always possible,” he said.

The health departments in both jurisdictions signed a joint memorandum on April 7th pledging to increase co-operation on Covid-19.

It stated: “Everything possible will be done in co-ordination and co-operation between the Irish Government and the Northern Ireland Executive and with the active involvement of the health administrations in both jurisdictions to tackle the outbreak.

“Protection of the lives and welfare of everyone on the island is paramount, and no effort will be spared in that regard.”