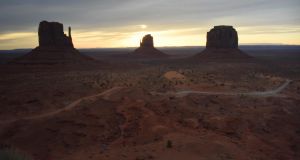 Monument Valley is home to the Navajo Nation, who have been badly affected by coronavirus. Photograph: Eric Baradat/AFP

A fundraiser to help Native Americans fight one of the worst coronavirus outbreaks in the United States has taken off in Ireland, with donations flooding in to pay tribute to aid from the Choctaw tribe during the famine.

Hundreds of thousands of dollars poured in to the Navajo & Hopi Families Covid-19 Relief Fund since it began to go viral in Ireland, helping it burst through its target of $1.5 million (€1.3 million).

The list of donors to the GoFundMe page is dominated by Irish surnames, and many donors left comments to say they were giving in remembrance of Native American aid to Ireland during the Great Hunger.

In 1847, members of the Choctaw tribe raised $170 in famine relief for Ireland, a huge sum for a time when they had very little, as it came after they had been driven from their land in the devastating so-called Trail of Tears.

Many comments on the GoFundMe page referenced the Choctaw donation. Some read “Ní neart go cur le chéile” and others simply “Ireland remembers”. “173 years ago, the people of the Choctaw nation showed Ireland unimaginable generosity,” wrote donor Michael Foy. “I am donating today in memory of our shared past, and to help overcome this crisis together – just as we did nearly two centuries ago.”

Cassandra Begay, a member of the Navajo Nation and one of the team organising the fundraiser, burst into tears as she told The Irish Times of seeing the donations flood in.

“We noticed that we were getting a lot of donations from Ireland so we were wondering why . . . sorry I get emotional talking about this part,” Ms Begay broke off. “And I learned about what the Choctaw did for the Irish people, and it was so beautiful.”

The fundraiser is for food, water, soap and cleaning supplies for those living in the Hopi and Navajo reservations, which span parts of Arizona, Utah, and New Mexico in the southwestern United States.

With a population of 170,000 and 73 confirmed coronavirus deaths, the Navajo Nation has been one of the hardest-hit populations in the US, and authorities fear the peak of infections is yet to come.

The community’s ability to fight the disease is hampered by poor living conditions on the reservation. Just 13 grocery stores serve an area larger than the Republic, and the Navajo estimate they have only 170 hospital beds. A third of homes do not have running water, and the legacy of US uranium mining in the territory to build its nuclear arsenal has left groundwater contaminated, making basic hygiene difficult.

The fundraiser is organised by a group of Native American women who are community organisers, and have set up a network of distribution points for food, water, and soap. The supplies are essential given that 38 per cent of people in the reservation live in poverty, and providing them helps the most vulnerable people to stay protected in their homes.

Ms Begay said the loss of so many older people had been a blow to efforts to pass down tribal languages and traditions. “A lot of our elders are passing, and they are like our libraries,” she said. “They carry on a lot of traditional culture, practices, they know a lot of our language which is becoming extinct. So when we lose an elder it is like losing a library of knowledge.”

But the news of the aid arriving from Ireland and the backstory of the Choctaw donation has spread among the community on the reservation, and has been received with great warmth, Ms Begay said.

“Many of us have never talked to someone who is Irish. It’s been a really difficult time, and to see the kindness that the Irish people have extended us has been really heart-warming, especially during this dark time because we have lost a lot of people and it’s devastating for our community,” Ms Begay said.

The Choctaw aid, which is remembered by the Kindred Spirits sculpture by Alex Pentek in Midleton, Cork, is not the only example of solidarity between Irish people and Native Americans in history.

In a mission to drum up support for Irish independence in the US in 1919, future president Éamon de Valera was made an honorary chief by the Ojibwe-Chippewa tribe, who greeted him as “a representative of one oppressed nation to another”, according to a contemporary news report.

Ms Begay said the support from Ireland was vital as she feared the outbreak could worsen as several US states begin to ease restrictions.

“The donations that we’ve received from Ireland are definitely going to save lives and help protect people,” Ms Begay said. “We’re going to make sure that money is used to get food and essential supplies and water to our elders and our families. It definitely makes a difference and we will always remember.”