Study of global heating finds climate niche that has supported humanity will shift more in next 50 years than in preceding 6,000 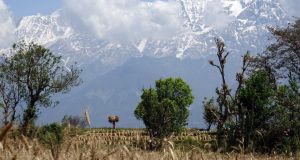 Indian farmers harvesting wheat. As much as one third of the world’s population could be exposed to Sahara Desert-like heat within half a century. Photograph: EPA/Sanjay Baid

More than three billion people will be living in places with “near unlivable” temperatures by 2070, according to a major study of global heating trends.

Unless greenhouse gas emissions generated by human activity fall, large numbers of people will experience average temperatures across a year hotter than 29 degrees. Less than 1 per cent of the Earth’s surface now endures temperatures averaging 29 degrees.

That heat compares with the narrow 11 to 15 degree range that has supported civilisation, including food and livestock production, over the past 6,000 years, according to the research published in the journal Proceedings of the National Academy of Sciences.

The researchers used data from United Nations population projections and a 3-degree warming scenario based on the expected global rise in temperature.

A number of studies have previously found that even with countries keeping to Paris climate agreement targets, the world is currently on course for at least a 3-degree rise.

According to the latest study by scientists based in the UK, Denmark, the US and China, human populations are concentrated into narrow climate bands, with most people living in places where the average temperature is between 11 and 15 degrees. A smaller number of people live in areas with an average temperature of 20 to 25 degrees.

As much as one third of the world’s population will, however, be exposed to Sahara Desert-like heat within half a century if emissions continue to rise at the pace of recent years, they conclude. The “narrow climate niche” that has supported human society would shift more over the next 50 years than it has in the preceding six millennia, they predict.

“Absent climate mitigation or migration, a substantial part of humanity will be exposed to mean annual temperatures warmer than nearly anywhere today,” they add.

Dr Xu Chi of Nanjing University told the Sydney Morning Herald: “We were frankly blown away by our own initial results. As our findings were so striking, we took an extra year to carefully check all assumptions and computations.

“Clearly we will need a global approach to safeguard our children against the potentially enormous social tensions the projected change could invoke.”

Among the most exposed nations will be India – where many people live in “already hot places” – with as many as 1.2 billion people likely to be forced to move if population and warming trends continue.

For Nigeria, the number exposed could be 485 million, he confirmed – the scenario used projected the total populations in India and Nigeria to reach 2.2 billion and 600 million respectively.

While the research extends current population and emissions trends into the future, it excludes impacts from the coronavirus pandemic, and accepts precipitation impacts would be inevitable.

Compared with pre-industrial-era conditions, temperatures globally will be about 3 degrees hotter by 2070. But as land warms faster than the oceans, the rise for people on average will be about 7.5 degrees, the researchers note.

Should the world adopt strong emissions reductions, however, it would “substantially reduce the geographical shift in the niche of humans, and would reduce the theoretically needed movement to about 1.5 billion people”, they add.

The researchers note upheavals among populations – and the ecosystems that support them – could happen well before 2070, with consequences for climate-driven migration.

“Migration inevitably causes tension, even now when a relatively modest number of about 250 million people live outside their countries of birth,” they point out.

One of the researchers, Prof Tim Lenton, director of the Global Systems Institute at the University of Exeter, said: “The study hopefully puts climate change in more human terms...The good news is that these impacts can be greatly reduced if humanity succeeds in curbing global warming.”