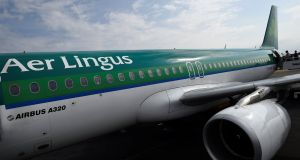 According to the document, the changes proposed are ‘the minimum required now in terms of operational change and may need to be revisited should the situation worsen’. Photograph: Clodagh Kilcoyne/Reuters

Aer Lingus has proposed a wide-ranging set of pay cuts and working practice adjustments for its staff, according to a confidential document shared with unions.

The discussion document outlines a deal which would run until the end of February 2022, which the airline says is designed to help it navigate the effect of the Covid pandemic on the aviation sector, which it describes as as “unprecedented”.

No agreement has been struck on the document, which was characterised by a source as a discussion paper.

According to the document, the changes proposed are “the minimum required now in terms of operational change and may need to be revisited should the situation worsen”.

“The challenge now faced is many many times worse than anything we have experienced previously and will take a number of years to recover from.” it says the crisis has had a “devastating impact” on the business which “requires immediate action to ensure our survival”.

It says “immediate and sustainable work practice changes and efficiencies are now required across Aer Lingus in the face of the greatest crisis that the airline industry has ever experienced.”

The document states that “work practice change will be implemented across all Aer Lingus operational areas”. While it states that the proposed deal is to run to February 2022, it also notes that “these changes once implemented will last in perpetuity and are irrevocable”.

The document outlines a series of wide-ranging changes that would link pay to hours worked, which in turn would be determined by “operation requirements”.

It states that for the duration of the proposed understanding, there will be no pay increases and no pay claims served by the group of unions. Pay, it says, will reflect work available - therefore, three days work rostered in a week will result in 60 per cent pay. The volume of work will be dependent on operational requirements, the document states.

Notwithstanding this, it says that until the end of August, even operational areas with a 100 per cent requirement in terms of hours will only see pay at 75 per cent of norms. Conversely, if work requirements in any area fall below 50 per cent, pay will be maintained at half normal levels. However, such payments will be characterised as “overpayments to the individual staff members are are subject to recovery from the work group involved”. These overpayments will be clawed back, the document suggests, by holding “work group” pay to 80 per cent of basic norms when a higher work requirement resumes.

“Aer Lingus aspires to restoring pay and hours at the earliest feasible time that the market and operating conditions allow. It is likely that this will happen on a phased basis,” the document states, before again warning that “should the situation materially deteriorate (e.g. a second wave or extended quarantine) then it will be necessary to re-visit these measures”.

If the deal is agreed, Aer Lingus is proposing to “recognise the contribution” of staff at the end of the deal, either through a once-off payment or “an appropriate upward revision in pay from that time”.

This depends several factors, including profitability, the health of the company’s balance sheet, and the “level of operations pertaining in Aer Lingus at that time”.

A series of appendices to the document deals with fine detail as to how maintenance, cabin crew and ground staff will be affected, should the proposed deal be agreed.

These include ground operations staff who have historically been given fixed or static duties being asked to “support the wider operation (such as boarding)”. Meanwhile, the length duration and times of shifts may vary. Staff may be assigned the arrival of a flight and then reassigned a separate departing flight.

Engineers are being asked to support the use of “contingent labour . . . in certain circumstances during peak demand and when work is outside the scope of the Aer Lingus team”.

Cabin crew “will support the ground operations team in Dublin/Cork and Shannon with the marshalling of passengers.”

Asked about the document on RTÉ’s Prime Time programme, Donal Moriarty, chief corporate affairs officer with the carrier, said it was in the early stages of discussions with unions.