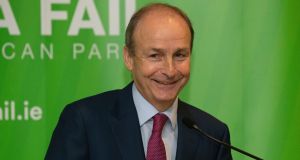 Environmental activists, trade-union leaders and employers have welcomed the endorsement of the programme for government and are calling for major investment in the economy as it struggles to recover from the Covid-19 pandemic while achieving key policy goals.

Fergal O’Brien, director of policy with employers’ group Ibec, said the establishment of a new government “is very positive for economic and business confidence”.

“The programme for government is a sensible one, and there’s some really urgent legislative issues that have to be addressed.”

He reiterated calls for a massive spending plan to be signed off this month, amounting to €15 billion on top of already-committed funding, saying that Ireland is a “long way behind most other countries in terms of addressing liquidity problems for business”.

“We need to save as many businesses and jobs as possible and it’s urgent that happens over the month of July,” he said. “We need a simple grants system that will work, lower cost loans and support for hospitality and domestic businesses to get people in jobs and back spending.”

Patricia King, general secretary of the Irish Congress of Trade Unions, said the group of unions will “work with the incoming government and of course be emphasising the importance of our document, No Going Back, which sets out a new deal for workers and society and is a detailed plan on the way forward for the country amid the unprecedented economic global crisis caused by the Covid-19 pandemic”.

Environmental groups urged the government to put climate change policies at the core of its agenda. Oisín Coghlan, director of Friends of the Earth, said the programme for government is “by far the strongest we have seen of any government on climate action”.

“The focus will now be on delivery,” he said. “We campaigned for faster and fairer climate action and this programme for government is a step in the right direction, but it’s just a down-payment and we’ll be making sure they deliver.”

Karen Ciesielski, co-ordinator of the Environmental Pillar, a network of NGOs which represents the Irish environmental sector, said: “Our main tenet is that every party must act on the science in relation to climate action and biodiversity loss; we welcome the inclusion of the first steps for the environment but now the delivery requires more detail. We only have one chance to get this right.”

Dr Cara Augustenborg, environmental policy fellow at University College Dublin, said there “will be a need to prioritise the formation of the new climate change council and draft the Climate Action Amendment Bill within the first 100 days of government, with plans on how each sector will contribute to the new emissions reduction target of 7 per cent per annum.”