Concerns raised over ‘forest parties’ in Dublin and Wicklow mountains 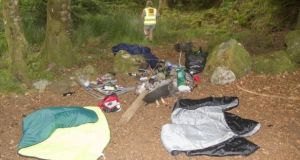 The aftermath of a ‘wild camp’ in Co Wicklow.

Authorities for the Dublin and Wicklow mountains were to meet on Friday after a series of “wild camps” and “forest parties” resulted in intensive dumping in the area over recent weekends.

Tents, barbecues, bottles, sleeping bags, plastic bags, cans, glass bottles, food items, and more unwanted material have all been left behind by partygoers, most recently in the Glenmalure valley.

Gardaí, local councillors, and Wicklow County Council officials, as well as members of the Protecting Uplands and Rural Environments (Pure) Project and the Wicklow Uplands Council, were to meet on Friday in a bid to prevent a recurrence of the problem this weekend.

According to the Wicklow Uplands Council, one State-owned forest featured waste over several acres following one event there, with the scale of the rubbish likely to require multiple days to remove and the aid of a truck.

This dumping appears to follow events published on social media over several weekends.

Teams from Glenmalure Pure Mile and other volunteer groups regularly clean up litter in the area, which is popular with hillwalkers, campers and day-trippers.

Ian Davis, director of the Pure Project, said the forest parties or wild camps appeared to be happening right across the Dublin and Wicklow mountains. He said they appeared to be associated with the easing of Covid-19 restrictions.

Mr Davis said the uplands were an amenity to be enjoyed and it would be sad if the area had to be closed off to those who wanted to enjoy the environment there. He said visitors were welcome but asked them to remember to “take out what you bring in”.

Last year the Pure Project removed 150 tonnes of rubbish, a figure which compared with 344 tonnes in 2009, which Mr Davis said marked a significant reduction.

Over 885km of roads, mountains, woodlands, valleys, and upland amenities in the area have been cleaned by the Pure Project since it was set up in about 2008.