Coronavirus: Holohan ‘beyond nervous’ about increase in overseas travel 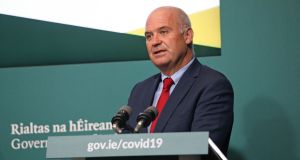 Chief medical officer Dr Tony Holohan has said he is “beyond nervous” about any increase in overseas travel that could contribute to a resurgence in Covid-19 infections.

He told a National Public Health Emergency Team (Nphet) briefing on Friday that, in relation to people’s holiday planning, “my advice is to listen to us and not to the airlines”.

Asked about plans to draw up a “green list” of other countries with which travel would be allowed after July 9th, he said that if it were being drawn up today, many European countries would not appear on the list. Meanwhile, many countries that would make it onto the list were not the countries that people typically visited for holidays.

Officials expressed concern about an increase in new cases linked to foreign travel – 13 over the past two weeks, or 6 per cent of the total. The countries involved included India, Pakistan, Bangladesh, the US, the UK, Spain and Portugal.

Dr Holohan said a “green list” would have to be based on “trustworthy” and verifiable information shared at European level about incidence of coronavirus in different countries.

Dr Holohan also expressed concern that the public health message was not getting through to some people, commenting that he had travelled home on Thursday evening via Dublin’s Grand Canal: “A lot of people were wedged in beside each other as if nothing was going on.”

A further three deaths of patients with Covid-19 were reported by Nphet on Friday. This leaves the total number of Covid-19 deaths in the Republic at 1,730.

Nphet also reported another 11 confirmed cases of the disease, bringing to 25,414 the total number of confirmed cases since the outbreak began here at the end of February.

Transmission of the virus in the community continues to be at a very low level, according to Prof Philip Nolan, chair of the Nphet epidemiological modelling advisory group.

All the indicators of the spread of the disease in Ireland are very positive and stable, or even in decline, Prof Nolan said.

The average number of new cases has declined to nine per day from 15-20 a week earlier, while the number of people in hospital as a result of the virus has declined from 40 to just in excess of 20.

Not only had cases not increased since Covid-19 lockdown restrictions were eased on June 8th, but they have declined, he said.

However, Prof Nolan expressed concern about the rising proportion of young people affected by the virus; under-40s now account for more than half of all new cases.

One further coronavirus-related death and four new cases were reported in Northern Ireland on Friday.

Meanwhile, the Health Service Executive published design and data privacy documents on Friday ahead of the launch of its Covid-19 tracker app.

The smartphone app, which is designed to aid the contact tracing process, will become available next week.

Minister for Health Simon Harris announced €2.4 million in funding for international clinical trials of potential new treatments for Covid-19, with patients to be recruited from next week.

The Government has formally signed up to the World Health Organisation’s Solidarity research collaboration. The trial has to date recruited more than 5,000 patients across 35 countries. Another 100 countries are awaiting approval to participate in the trial.